Kate Baldwin Explains How She is An Extraordinary Machine

Kate Baldwin Explains How She is An Extraordinary Machine 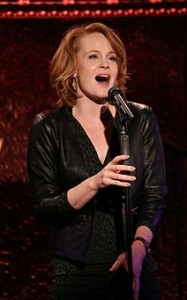 Tony Award nominee and soon to be co-starring in Hello Dolly, Kate Baldwin (Big Fish, Giant, John & Jen, Finian’s Rainbow, Songbird) comes to Feinstein’s/ 54 Below in an evening of songs and stories. She will comically deconstructs the façade of being a Broadway star, mother and Midwest ingénue turned New Jersey suburbanite. Featuring an eclectic mix of Broadway, indie pop, folk, and country melodies from such artists as Fiona Apple, Ingrid Michaelson, and Elvis Costello, Baldwin promises to pull no punches in a show that is both unexpected and unencumbered.  With musical direction by Kris Kukul (Songbird), and a few special guests Matt Doyle. Directed by Robbie Rozelle.