Kate Hamill’s Little Women Pleases without Putting a Feisty Ring on it. 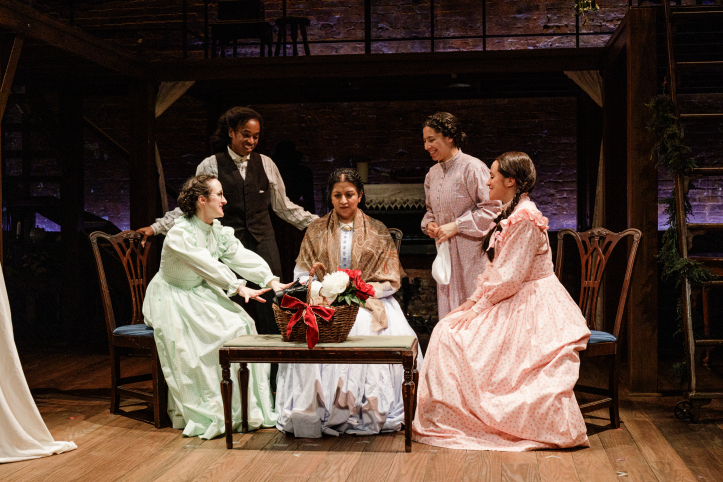 Kate Hamill’s Little Women Pleases without Putting a Feisty Ring on it.

She’s my adaptation goddess, the phenomenal Kate Hamill, the playwright behind so many wise, witty, and wonderful recreations of classic novels from the 19th Century.  She wrote and starred in the widely embraced Sense and Sensibilityat Bedlam, and the most joyful Vanity Fair I have ever laid eyes on at the Pearl. That redefining was filled to rim with hilariously smart modern touches of Beyonce dance moves free of any constraints of naturalism and attention to historical recreations. Vanity Fair was the perfect blend of Bedlam‘s theatrical inventiveness with the more classic (now defunct) Pearl Theatre Company mashed together with Thriller moves and the guilty pleasure of watching such a tale being told in that wildly entertaining manner.  It had a slice of the modern world infusing and tweaking a classic with a wink and a grin. Pride and Prejudice was another of her not-so-guilty pleasures. It was a pure theatrical delight, with Hamill giving forth a playful and smart romp through the English countryside of Austen’s world. Wonderfully laid out within the same wild stroke of her pen, she set a challenge for us all to look at classic women’s roles in theatre and society and demand for more: more balance, more focus, more joy, and well, just plain more of the smart fun Hamill is determined to say.

Little Women is her newest and latest adaptation, one I was totally excited to see, currently taking over the stage at the lovely and sweet Cherry Lane Theatre. Hamill has found inside Louisa May Alcott’s (1832–1888) semi-autobiographical novel that details the passage from childhood to adulthood, a very modern and relevant social commentary on societal gender roles, and how uncomfortable they fit onto some.  In the year of NYC World Pride and the anniversary of the Stonewall Riot, she’s taken a quintessential American novel, beloved by many and read by more, and formulated something kind and accepting in the want and desire of a role outside the expected and predetermined. Alcott must have been quite ahead of her time, as she has found a way to etch inside the character of Josephine, or Jo, as she likes to be called, a character who fights hard to forge her own pathway into unchartered non-binary territory.  Now, I’ve never read the book, shocking I know, but inside Hamill’s version, Jo wants to be a published author and esteemed writer of fiction, and not a gentle lady, like her sister, Amy, played by the fun  Carmen Zilles (Signature’s Small Mouth Sounds). Jo (and I’m determined not to use the feminine pronouns, because I’m not sure Jo would want them, if asked from our modern day perspective), much like the novelist herself, wanted something that didn’t fit so neatly into a box, but the time and the place: Massachusetts in genteel poverty during the Civil War, has no obvious pathway for her to travel there, nor any guide posts along the way to direct her. As portrayed with determination and strength by Kristolyn Lloyd (Atlantic’s Blue Ridge), her dilemma resonates solidly and smartly, especially within the context of todays LGBTIQA+ inclusive world dynamic. It’s a parallel that is wondrous to behold, and thankfully Hamill had the brilliance to see it standing so clearly in hidden view before us. Jo’s journey isn’t given enough misdirection or uncertain leeway to grow and develop in this retelling, but the passion and determination is clear and focused.

The same could almost be said for next door neighbor, Theodore ‘Laurie’ Laurence, played with grace and joy by the very appealing Nate Mann (Julliard’s Golden Boy). He’s a young man being groomed with impatience by his grandfather (John Lenartz) to become a well off businessman. He dreams of a life that allows him to kick off his uncomfortable shoes and play with the girls, in essence. And it’s a glorious thing to behold, especially in Mann’s charming hands, but unlike Jo, he is given transformation and development that enriches his presence, and for that, I am grateful.

Hamill (Bedlam’s The Seagull), as she loves to do, gets her own well-suited developmental part, as sister Meg, desperate to follow the societal path forward into marriage and motherhood; to be her own version of Marmie – usually played by Maria Elena Ramirez (2ST’s Mary Page Marlowe), but at the performance I attended, the part was genteelly played by Mary Bacon (Primary Stage’s Roads to Home). Her clumsy romance and trip into adulthood with the adorably awkward Brooks, played with pleasure by Michael Crane (Off-Broadway’s Gloria) – who does a glorious parrot as well, is just what the Hamill doctor ordered. Their partnership, and the parrot of the rich aunt, is where the playwright and the actors retain their joyous pleasure in silliness and fun. Unfortunately, the rest of this Civil War era stroll is a bit too earnest and determined to reach the same destination as her other reframed masterpieces.

As directed with tireless finesse by collaborator Sarna Lapine (Broadway’s Sunday in the Park…), Hamill and company fly forward through this difficult and complicated landscape and plot, finding the sentimentality within “poor Beth”, played sweetly by Paola Sanchez Abreu (Off-Broadway’s The Wolves) to lead the way and carry this all home. I missed the playfulness of playwright Hamill (although she serves it up well as Meg). There are no Moonwalk dance breaks, pop songs, or effervescent musical ridiculousness, and when it does show its smiling face, sometimes in the welcomed overdone-ness of Hannah and Mrs. Mingott, both portrayed by the wonderful Ellen Harvey (Broadway’s Present Laughter) or in the mean Aunt March (Ramirez/Bacon) and her parrot, they feel sadly out of place.

On a well orchestrated set by the crafty designer Mikiko Suzuki Macadams, with inventive and playful costuming by Valérie Thérèse Bart (Two River’s Noises Off), detailed lighting by Paul Whitaker, and solid sound design by Leon Rothenberg (Broadway’s Hillary & Clinton), the gentleness and modernness of Louisa May Alcott’s Little Women does shine a kind and lovely light on a family bathed in acceptance and love. Although Jo’s character doesn’t drive the piece forward, as the character is so clear and upright from the very first scene, the rebel with a cause stands strong, but has no where to go or grow into. It’s clear from the very beginning that the partnership with Laurie can never be what he wants and pines for. The conflict is only for him to figure out. There is love for “the monster“, and beauty in that fact that no one tries to slay it, but Jo’s clearly defined vantage point doesn’t help us engage, nor does it give us something to cheer or march for. But it does gift us with a solid and sweet theatrical storytelling of a classic tale,. It’s perfect to bring my young theatre going companion Hazel to (who just finished up second Grade), but leaves a slightly disappointed frontmezzjunkie to wish for, alongside the endearing Laurie, a few more high-jinx and high kicks inside a tale for our modern world from long ago.