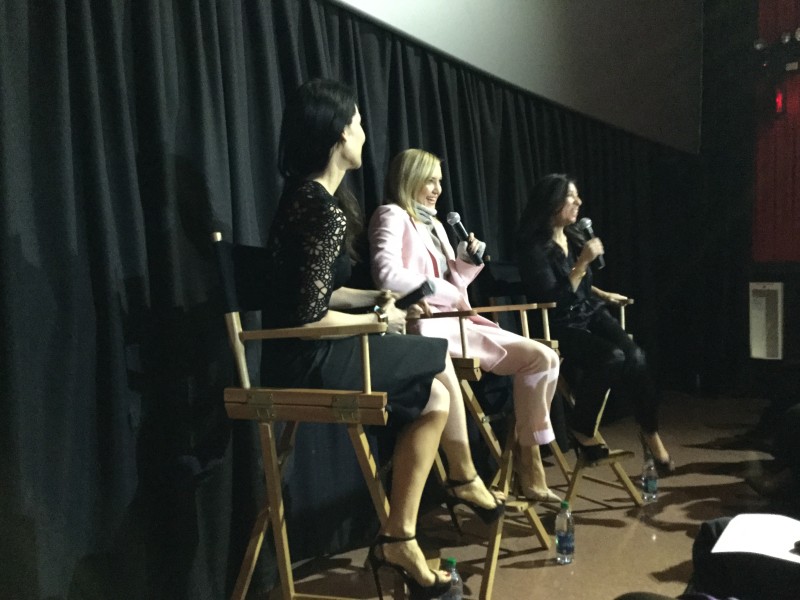 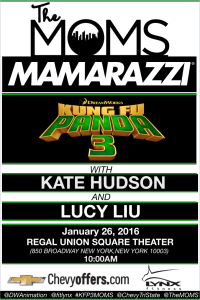 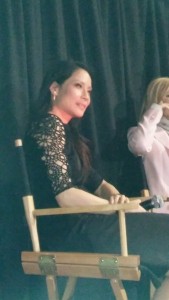 “What I love about this particular movie is that it talks about  love and acceptance. Even if you have a birth father or an adoptive father it doesn’t really matter its your family or the people you surround yourself with. There is enough love to go around..” ~Lucy Liu, The MOMS MAMARAZZI® 2016 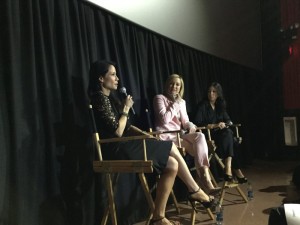 “When you find what you’re passionate about it drives so much of your life acting, singing, and dancing are a few things I’m passionate about but people are my true passion, really connecting with them and I find that I can do that in so many different ways.”  ~Kate Hudson, The MOMS MAMARAZZI® 2016

“Kung Fu Panda 3” is absolutely adorable. I actually am not a fan of 3D anything as it makes me sick, but this one is full of such colorful visuals that it is well worth it. DreamWorks Animation has incorporated, heart, witty dialogue, kid-friendly humor and spirituality. The message her is one of family, the  courage to living up to one’s potential and unconditional love.

Jack Black is the lead Po, a rotund panda hero and reluctant Dragon Warrior. When facing the evil Kai (J.K. Simmons), Po states “Chitty, chitty, chat, chat. Chat, chat, chat.”In discovering that other pandas don’t use chopsticks to slow them down: “I always knew I wasn’t eating up to my full potential!”

Beginning in the spirit realm, Oogway (Randall Duk Kim), a tortoise and the ancient kung fu master is attacked by a bull named Kai, his former friend. Kai has collected all the “chi” power from kung fu masters and storing it in amulets. His goal is to rule the mortal world as he has been banished to the spirit world.

Meanwhile back on earth Luckily, Po has been told by master Shifu (Dustin Hoffman) he is to take over teaching kung fu. When Po’s biological father, Li (Bryan Cranston), turns up, he causes anxiety and sparks jealously for Po’s adoptive father, Mr. Ping (James Hong) a duck. Po journeys with Li to master his “chi,” when he learns Kai is coming. Angelina Jolie as Tigress, Lucy Lie as Viper, Seth Rogan as Mantis, Jackie Chan as Monkey and David Cross as crane are all back. New to the film is a sexy Panda ribbon dancer, Mei Mei, voiced by the delightfully enchanting Kate Hudson. Jack Black’s and Angelina Jolie’s kids voice a couple the smaller roles.

The film is co-directed by Jennifer Yuh Nelson and Alessandro Carloni,

Look for up-coming interview with Kate and Lucy.