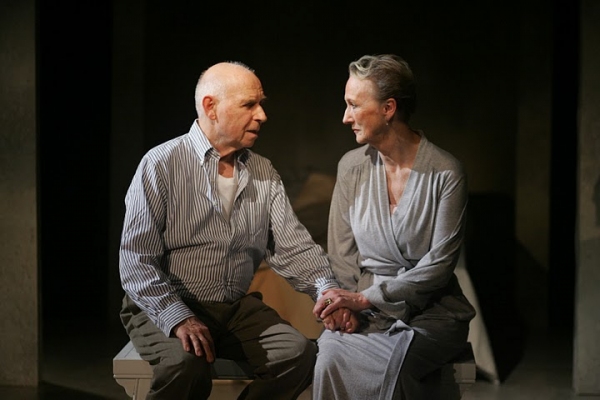 Blue Valiant, will star two of America’s most respected, multiple-award-winning actors, Kathleen Chalfant, and George Bartenieff and introduces Millie Ortiz. Written and directed by Karen Malpede and filmed on location at Farm Arts Collective, with a score by Arthur Rosen and horse projections by photographer Ellen Lynch.

Blue Valiant will be released for public viewing on October 24. This web event is being made available free of charge by the producers Theater Three Collaborative and Evangeline Morphos and may be viewed starting October 24 and through the end of November at:  http://theaterthreecollaborative.org/blue-valiant.

An untamable blue roan horse becomes the catalyst for an emotional journey for three disparate characters. The script was crafted by Malpede especially for Chalfant with whom she has frequently collaborated. Bartenieff has been in all of Malpede’s plays since 1995 and won Obies for acting in two of them, “Us” and “I Will Bear Witness”.
Malpede rode and trained horses in her youth. She wrote Blue Valiant for Chalfant after discovering her love of horses. Chalfant’s children showed hunting horses.

This work was scheduled for a first reading at New York Theater Workshop, but the pandemic interfered. In the time of Covid, it became apparent that a web event could be the next step. Tannis Kowalchuk, artistic director of Farm Arts Collective, offered her space as a film location over the Memorial Day Weekend. But no one can predict the weather. Memorial Day Weekend was a wet one. Dress and tech rehearsals were rained out. However, the show did go on for two performances before live audiences and the result is this web event.