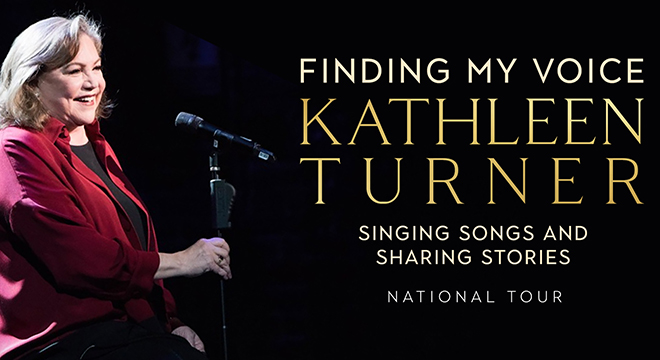 Peppered with music from the great American songbook, Kathleen sings hits including “It’s Only a Paper Moon”, “I’d Rather Be Sailing”, “On the Street Where You Live”, and “Every Time We Say Goodbye,” showcasing her trademark husky voice. Finding My Voice is a deeply personal show packed with humor, great music, and one of a kind insights from the lady herself.

Directed by Andy Gale (I Love You, You’re Perfect, Now Change, Audra McDonald with The Boston Pops for PBS), Finding My Voice features musical direction, arrangements and accompaniment from Mark Janas (Hello Dolly! With Marilyn Maye, The Salon) and the production designer is Ed McCarthy. Turner developed Finding My Voice in 2017 with Gale and Janas, and the show has played both nationally and internationally.

“In the show, I talk about growing up and how I started acting 42 years ago; then into present-day projects and the wild variety of work that I do,” said Kathleen Turner. “I want to take audiences inside my life – about me, my adventures, what I’ve learned and what I believe in. In Finding My Voice, there’s no hiding behind a character, but I really enjoy that.”

Kathleen Turner was nominated for the Tony Award in 1990 for playing Maggie in Cat on a Hot Tin Roof and in 2005 for her performance as Martha in Who’s Afraid of Virginia Woolf? opposite Bill Irwin. Who’s Afraid Of Virginia Woolf also garnered her an Evening Standard Theatre Award in the West End and Drama Desk Award nomination. On Broadway, Turner has also starred in High, The Graduate and Indiscretions and she starred in Bakersfield Mist in London’s West End. She toured as Texas-based political columnist Molly Ivins in Red Hot Patriot: The Kick-Ass Wit of Molly Ivins (Philadelphia Theatre Company, Geffen Playhouse, Arena Stage, Berkeley Repertory) and starred in Joan Didion’s solo drama, The Year of Magical Thinking and Mother Courage And Her Children, both at Arena Stage in Washington, D.C. Turner’s movies include Romancing the Stone and Prizzi’s Honor, each of which earned her a Golden Globe Award; Peggy Sue Got Married, which brought both Academy Award and Golden Globe nominations; and Body Heat and War of the Roses, both of which earned her further Golden Globe nominations. Turner received a BAFTA nomination for Body Heat, and two Grammy Award nominations. Additional film credits include The Man with Two Brains, Jewel of the Nile, The Accidental Tourist, and The Virgin Suicides, among many others, and she supplied the voice of temptress Jessica Rabbit in the film Who Framed Roger Rabbit. Also a best-selling author, Turner wrote Send Yourself Roses: Thoughts on My Life, Love, and Leading Roles and Kathleen Turner on Acting.

Tickets for Finding My Voice are $57 – $97 with premium tickets available. Premium ticket holders receive a signed headshot of Ms. Turner. Tickets can be purchased at www.KathleenTurnerOnTour.com or by calling (212) 997-6661.