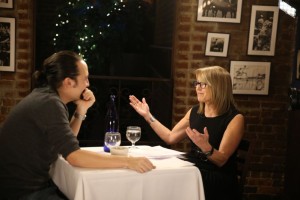 Yahoo Global News Anchor Katie Couric sat down for an in-depth discussion with Hamilton’s Tony-Award winning superstar Lin-Manuel Miranda who wrote the music, lyrics and book and stars in the Broadway smash hit. Miranda spoke with Couric about his love of hip-hop, performing for President Obama, the very first rap that he learned, his thoughts on Donald Trump and more.

Interview highlights include Lin-Manuel Miranda on:

His reaction to ‘Hamilton’s’ success  – “I have about ten different pinch-me moments a day…and the moment I stop pinching myself, I know I’m in trouble.”

His childhood and his parents’ influence on his love of music – “Yeah, we saw the three Broadway shows you saw if you saw any in the ‘80s…Phantom of the Opera, Cats, and Les Misérables. That was the holy trinity in the ‘80s…they left a huge imprint on me. But then I really fell in love with musicals by doing them in school…because suddenly I’m 12 years old, I’m 3’ tall, and every girl in my grade has to pretend to be in love with me and faint at my feet when I sing in my gold lame jacket that my grandma made me.  And I go, “Well, I’m doing this.  Whatever this is…I’m doing this for the rest of my life.”

His love of performing & how it feeds him – I was the kid who was like, “All right, there’s a show after dinner in my bedroom.” Like, “Here we go.”…that’s just how I’m wired. It’s really funny, my son has a little practice piano in our living room, and he always looks around to make sure everyone’s looking before he starts playing it. And I go, “Oh no, it’s another one.” It’s the same instinct.”

How he fell in love with Hip Hop – “It was always the most exciting music. I mean, again, I was born in 1980, so I’m just a few years younger than Hip Hop.  So it was always a part of my life. I remember when the Fat Boys came out… It was the music our parents didn’t listen to, but it was just for us.”

Why ‘Hamilton’ took six years to complete – “Hamilton’s story is so unlikely and so incredible that it kind of demanded everything from me. It demanded me working in almost every genre…and a few genres, I’d never written in before.  It demanded being able to articulate the world view and arguments of the people who were creating our country, and really every action they take sets a precedent…and sort of find the narrative within it and say, “How can we find a version of Hamilton’s life that sustains an evening of musical theatre?”

How he describes ‘Hamilton’ the Musical – “Tommy [Kail] coined the phrase that really is the best descriptor of it…which is, this is a story about America then told by America now. We use everything at our disposal to eliminate any distance between a contemporary audience and Hamilton’s story. So if that means we’re going to use trap music…we will use that.  If we can use jazz boogey woogey music…you know, for Jefferson’s entrance at the top of the act two, we’re going to use that.”

The Hamilton mixtape – “These are my heroes. Hamilton’s a lot of ways, a love letter to these artists and really the artists we’ve invited are a wish list of artists that I have been listening to my whole life… So it’s this it’s this weird links in a chain, these guys inspired me, this show is inspiring their verses. It’s the most incredible thing to get to be a part of that.”

How ‘Hamilton’ keeps him humble – “Well, one, I know that it’s the show that is making people freak out. But I create [the show] nightly with the help of a lot of other people. So I can separate that from me, this is not the Lin Miranda show. This is about Hamilton, and Hamilton’s level of achievement is so extraordinary. I get to pretend to be him for two hours and 45 minutes, and that’s enormously ego-gratifying. And, like, I get to do all the fun, ego-crazy things and leave it on stage, and then I go home and I, like—And my wife says…”You have the early shift with him in the morning, because I have a case.”…the show really lets me work all that out. 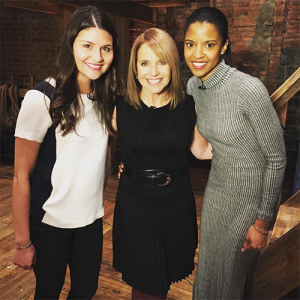 Interview highlights include Phillipa Soo and Renée Elise Goldsberry on:

What they knew about their characters ahead of time  –  PHILLIPA SOO: “I knew nothing. I knew absolutely nothing. As you Google her, there really isn’t much about her even then. So, you know, in working on it with them and meeting Ron and reading the book, you know, you kind of piece together who this woman was. But still, I mean, you know…there’s so much we don’t know about her…she had eight children. She lived to be 97. She established one of the first orphanages in NYC, which is now an active social service program called Graham-Windham.”

The relationship between the sisters and Alexander Hamilton – PHILLIPA SOO: “It’s beautifully complicated.”

RENEE ELISE GOLDSBERRY: “Unconventional love triangle. What I love about Angelica in this play is that it’s the beauty of a woman that actually did exist and the power of a woman that actually did exist that did that was remarkable…all by herself. And definitely, if women had a different role at that time…would’ve been one of the founding fathers of this country. I mean, definitely used her influence in all of those letters to motivate and move all of our founding fathers to accomplish what they accomplished.”

Ham 4 Ham Performances – RENEE ELISE GOLDSBERRY: “So we give them this kind of silly show sometimes, and sometimes a beautiful show. And more importantly, a lot of times we bring in a lot of other people from Broadway and different shows. It’s really a beautiful synergy and a way to keep, like, the love going, you know. Let’s share it with the world ’cause we didn’t really know that we would ever be this good.”

To watch the full interview on Yahoo: