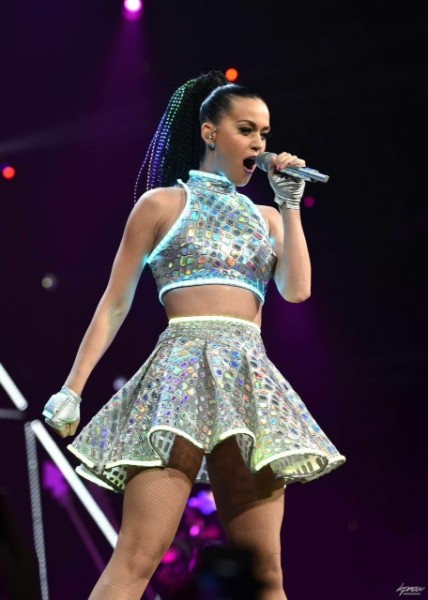 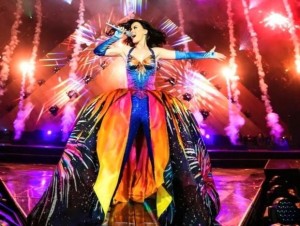 It was raining blue wigs, pink heart confetti and rainbow smiles Friday night at the United Center in the Windy City. Current reining Pop Princess Katy Perry brought her highly enjoyable “Prismatic” tour to town for two back to back performances, Thursday and Friday August 7 and 8 to boisterous cheers. Nine designer costume changes, a rainbow coalition of multi-colored hair pieces,  flying guitarists, and a team of talented back up dancers, this show was cotton candy for the soul; sweet, enjoyable, and made mostly for kids. Speaking of kids, the audience was surrounded by the four foot and under variety. Fairy wings, peacock feathers,  wigs of every color, these “Katy Kats” came dressed to play, even though their star started performing much past their bed times. 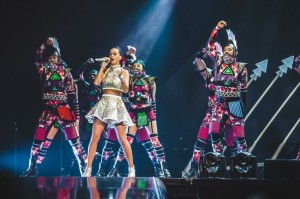 The show opened with last summer’s monster hit “Roar.” Katy appeared first in a glow in the dark, Lite Brite inspired, Roberto Cavalli  crafted silver crop top and skater skirt, adorned with multi-color changing light bulbs.  Imagine something Judy Jetson would wear to a high school dance.  As Katy sang and jumped rope, the light strands in her genie like black pony tail changed colors in unison with her outfit.  The festive attention to detail was met was thunderous audience applause. Her back up dancers,  garbed in futuristic, military style, plastic faux hawks, exploded out onto the stage as well in choreographed unison. Perry’s first set also included the hits, “Part of Me,” “Wide Awake,” and “This Moment/ Love Me.” 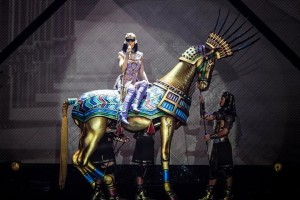 The next segment was Katy as Egyptian Goddess. Cher is working a similar concept in her current tour as well.  Katy emerged on stage in a lavender body suit and matching boots, riding a large horse puppet, much like the horses from Broadway’s “War Horse,” to the tune of  “Dark Horse.” As she cracked her authoritative whip, one could notice her wig, blonde roots with black ends and bangs inspired by synth pop 1980’s band Berlin’s front women, Terri Nunn.  A fact that didn’t matter here, none of the kids sitting near me, singing along loudly, were even born 1984 and would have no idea who this source inspiration might be. Everything old is indeed new again. Katy commanded all attention on her high flying production of “E.T.,”  bold dancing with “Legendary Lovers,” and hysterical  “I Kissed a Girl” being chased by a slew of back up dancers dressed as mummies with ample Dolly Parton inspired chests and Nikki Minaj booties. High camp, high drama and lots of fun. 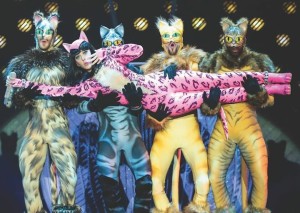 Katy Perry’s hard core fans are called “Katy Kats” and the next two numbers were just for them.  Dressed in a pink and black cat suit designed by The Blonds, Katy became Kitty Purry and along with 6 back up dancers dressed straight from a touring production of “Cats” performed a jazz infused interpretation of her early hit  “Hot N Cold” while prancing and jumping on human sized cat furniture.  Next up, “International Smile”  while chasing a dancer dressed as a Rat. Before this “schtick” became tiresome, they worked the literal cat walk to elements of “Vogue” by Madonna.  Strike a pose, indeed Ms. Kitty. 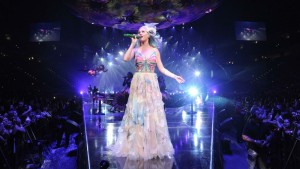 Setting the camp aside for the next few songs, Katy, donning a custom Valentino Haute Couture pink and beige gown with silver hooded caplet and matching blonde wig with blue and pink streaks, it was time for Katy for go unplugged. This acoustic set featured very simply, a girl in a gown playing guitar.  Lovely vocals on “By the Grace of God,” “The One That Got Away,” a stunning version of “Thinking of You,” and latest hit “Unconditionally.” Partnered with dancers flying large fabric butterflies over the dazzled crowd as Ms. Perry sang.   This visual was so tender, I will forgive Katy for what came next. Speaking directly to the audience while holding a Chicago Style Pizza box, Perry was perplexed as to why a sticker of Abraham Lincoln adorned the container. “Was Abraham Lincoln from Chicago” she inquired repeatedly? Oh dear, Katy. The 16th U.S. President has strong connections to a little town called Springfield, the Capitol of Illinois. I recognize no one came to a pop concert for an accurate history lesson, but this one stung. 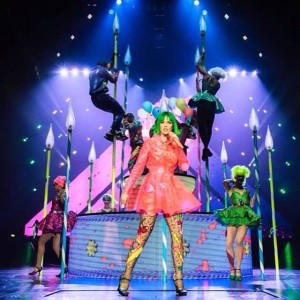 While Perry stepped off stage for yet another costume and hair change, and to possibly Google the connection between Abe Lincoln and Illinois, it was time for the “Throw Back Megamix dance party” portion of the show.  Just her team of acrobatic, flexible and powerful dancers dressed in tight 1980’s spandex shorts and tank tops, working their collective grove things to the tunes of “Everybody Dance Now,” “Finally,” “Everybody, Everybody” and “Pump up the Jam.” This was a festive filler which got everyone in attendance to get up on their feet while Perry caught her breath.  Back on center stage and dressed in a green wig and yellow smiley faced capri pants,  Katy and her troupe performed “Walking on Air,” “It Takes Two,” “This is How We Feel,” and  “Last Friday Night (T.G.I.F).”  With a high, energy up spirit, she inspired satisfied, toothy grins from the entire audience to match with her comical pants. 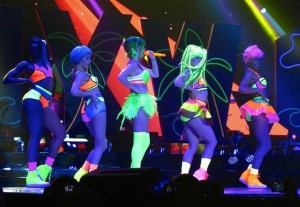 To take the adrenaline of the show up a few notches  higher, the “Hyper Neon” portion of her performance delivered.  Dressed in a bra and skirt that looked to be made of lettuce leaves, this tempting Eve lead us all so willingly into her Garden of Eden, peppered with the mega hits “Teenage Dream” and “California Gurls.”  Six foot neon letters spelling out “Yolo” and “Hollywood” decorated the stage behind the dancers to bring us all to a collective California state of mind.  A quick change into a  Di$count Universe multi colored cat suit with two big smiles over her breasts, Katy’s team found a willing male audience member,  who just happened to be celebrating his birthday that very night, and asked him to join them on stage. Seated on a thrown built into a giant birthday cake, adorned with dancers doing backflips on the pole/candles,  Katy gave him a short, PG rated lap dance while singing her latest hit, “Birthday.”  Slightly distracting, this audience member just sat there and chomped on his gum completely unaffected. Mid-song, Perry flew over the audience while attached to a swing adorned with  balloons, while simultaneously showering the audience with pink, yellow and baby blue confetti of small hearts and stars.  It was impossible to not be under the spell of this delightful “pop tart.” 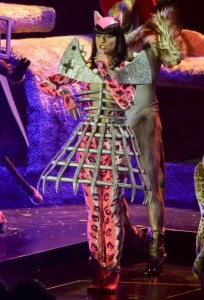 The finale/encore of the Prismatic Tour was the #1 single and MTV Award-winning song “Firework.”  Owning the United Center stage, outfitted with royal blue sequin leggings and a large Todd Thomas New York ball skirt, it adorned with firework explosion designs, Katy and 16,000 fans belted this anthem of self esteem and self-actualization, during which real fireworks exploded over head, across the stage, and  behind her. In a world full of disposable pop songs and artists, the visual of “Firework”  was so profoundly performed.  I looked at all the kiddos & “Katy Kats” around me knowing this would be the image burned into their young memories, recalling with such fondness, their first concert experience. Much like I remember the explosive and electric performances from both Prince and Sheila E. during their Purple Rain tour when I was a teen at one of my first concerts. 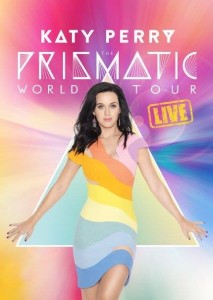 If you have the opportunity to catch the Prismatic tour this summer, I encourage you to go.  I made a cotton candy reference earlier when describing the show and I will leave you with this thought.  When was the last time you ever saw anyone not enjoying cotton candy with an ear to ear smile?  Women are ruling the pop charts, radio play and the stage. Perry’s Prismatic show packed quite a pop-filled punch.