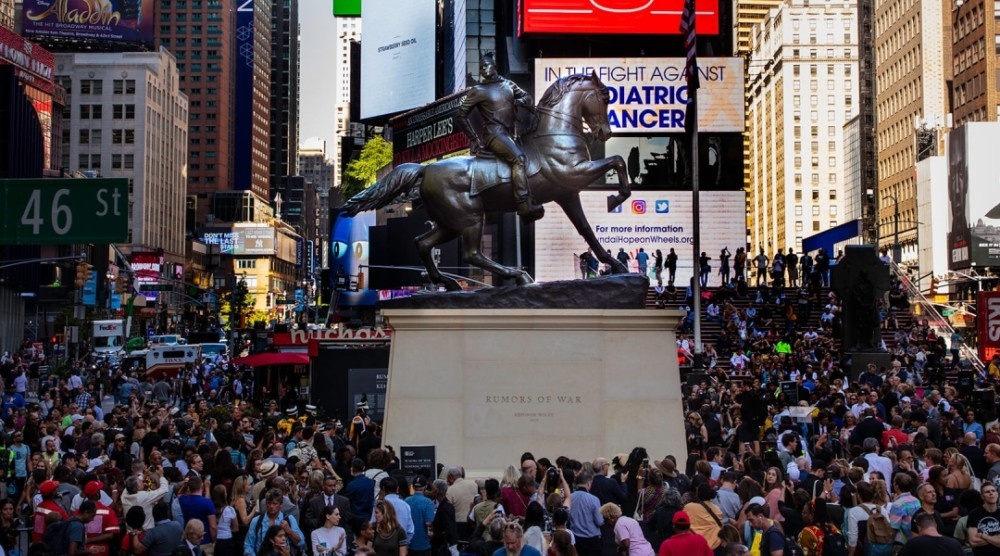 Kehinde Wiley is a world-renowned visual artist, best known for his vibrant portrayals of contemporary African-American and African-Diasporic individuals that subvert the hierarchies and conventions of European and American portraiture. Rumors of War, his largest work to date, and new sculpture, engages its complicated visual rhetoric of warfare on an epic scale. Wiley’s public sculpture, will be on display on the Broadway Plaza between 46th and 47th Streets, until December 1st.

Following its presentation in Times Square, Rumors of War will be permanently installed on historic Arthur Ashe Boulevard in Richmond at the entrance to the VMFA, a recent acquisition to the museum’s world-class collection.

Mounted proudly on its large stone pedestal, Wiley’s monumental bronze sculpture, Rumors of War, is the artist’s direct response to the ubiquitous Confederate sculptures that populate the United States, particularly in the South. Sitting astride a massive horse in a striking pose, Wiley’s young, African-American subject is dressed in urban streetwear.

Kehinde Wiley states, “The inspiration for Rumors of War is war—is an engagement with violence. Art and violence have for an eternity held a strong narrative grip with each other. Rumors of War attempts to use the language of equestrian portraiture to both embrace and subsume the fetishization of state violence. New York and Times Square in particular sit at the crossroads of human movement on a global scale. To have the Rumors of War sculpture presented in such a context lays bare the scope and scale of the project in its conceit to expose the beautiful and terrible potentiality of art to sculpt the language of domination.”

Standing as a statue to the violence afflicted against bodies every day, Wiley’s work presents a powerful visual repositioning of young black men in our public consciousness while directly engaging the national conversation around controversial monuments and their role in perpetuating incomplete narratives and contemporary inequities. In recent years, the discourse and actions around these monuments have included efforts to better contextualize them and have resulted in both the addition and removal of monuments in more than 30 states and New York City. Premiering Rumors of War in Times Square situates Wiley’s work at a global crossroads of civic engagement – where the black body of Wiley’s subject can become itself the battleground for evoking change and where the epicenter of Manhattan can become a space for citizens of the city, the country, and the world to come together to discuss the most important issues of our time.

Times Square Alliance President Tim Tompkins states “We are incredibly excited to be working with Wiley, one of the most celebrated and important artists of our time, and one uniquely equipped to challenge how we use our public space, to ask the critical question of “who matters?”, and to speak to the power of monuments to reflect and reinforce our values, and ultimately, reimagine our world. We are honored to be premiering this historic work, and to join the Virginia Museum of Fine Arts in supporting Wiley’s contribution to this important national conversation.”

The project originated when the artist encountered the equestrian monument to Confederate States Army general James Ewell Brown “J.E.B.” Stuart while visiting Richmond, Virginia for the opening of Kehinde Wiley: A New Republic at the VMFA in June 2016. A few blocks away from the museum is Monument Avenue, a nationally landmarked boulevard lined with Confederate statues, including monuments to Robert E. Lee, Jefferson Davis, and Stonewall Jackson. These monuments have a particular resonance because they function to continually commemorate the Confederacy.

The state of Virginia has more memorials to the Confederacy than any other state in the country. As with many Confederate monuments, erected in the aftermath of Reconstruction, their function was meant to not only memorialize the dead, but also to reestablish a social order. This also accounts for the relatively few monuments that recognize women and people of color, making the VMFA a powerful place to site Wiley’s historic work.

VMFA Director Alex Nyerges states, “The installation of Rumors of War at the Virginia Museum of Fine Arts later this year will be a historic moment for our museum and for the city of Richmond. We hope that the sculpture will encourage public engagement and civic discussion about who is memorialized in our nation and the significance of monuments in the context of American history. We are especially pleased that through the acquisition of this work, the monuments in Richmond will further reflect the incredible diversity of its population.”

Wiley’s career has focused on addressing and remedying the absence of black and brown men and women in our dominant visual, historical, and cultural narratives. Wiley’s subjects have ranged from street-cast individuals the artist encountered while traveling around the world to many of the most important and well-renowned African-American figures of our generation, including The Notorious B.I.G., LL Cool J, Carrie Mae Weems, Nick Cave, and President Barack Obama.

In the early 2000s, the artist created a series of paintings entitled Rumors of War, which explored the iconography of wealth and warfare in historical paintings, drawing upon the visual language of glorification, heroism, and violence. True to his practice, these large-format paintings, inspired by the history of equestrian portraiture, anachronistically replaced the white, aristocratic subjects typical of the genre with young, African-American men in street clothes.

At that time, these works were developed out of a reaction to the Gulf War and the Iraq Conflict. Nearly two decades later, Wiley’s new public sculpture at once serves as an important reminder that violence continues every day on our streets while simultaneously offering an exquisite example of how to imagine and enact a more complete and inclusive American story.

Sean Kelly states, “Kehinde’s work has always sought to address the historical imbalance of the representation and depiction of the black body in art historical and cultural contexts. Rumors of War extends that investigation into the sculptural realm with his largest three-dimensional work to date. The work deals head-on with the history of racially divisive and provocative Confederate monuments which venerate the American Civil War.”

Rumors of War is presented by Times Square Arts in partnership with the Virginia Museum of Fine Arts (VMFA) and Sean Kelly, New York. Support for Rumors of War is provided by The Andy Warhol Foundation for the Arts; the National Endowment for the Arts; the New York State Council on the Arts with the support of Governor Andrew M. Cuomo and the New York State Legislature; and public funds from the New York City Department of Cultural Affairs in partnership with the City Council.