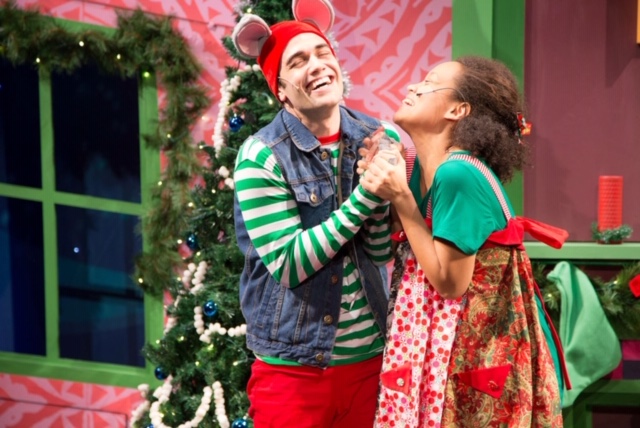 Ken Ludwig’s Twas the Night Before Christmas – Back For Seconds

Ken Ludwig’s Twas the Night Before Christmas – Back For Seconds 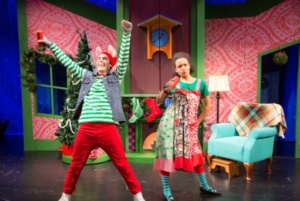 Returning for the second straight year in a row, Emerald City Theatre is staging their now modern day holiday production of Ken Ludwig’s Twas the Night Before Christmas at the Broadway Playhouse Theater at Water Tower. Stretching the classic Christmas time poem into a full scale, hour long musical, stuffed with charm, music, hip-hop dancing and North Pole swashbuckling sword fight choreography to appeal to kiddos. Emerald City’s Artistic Director Jacqueline Stone is at the helm as Director, setting a frenetic pace of sometimes silly, sometimes sappy, but ultimately charming holiday treat, sweeter than any gingerbread cookie you may nibble. The calendar may be down to its last page, but this Emerald City’s production is full of charm, wit and enough laughter for all the members of the family to enjoy. 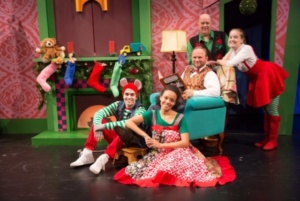 Our story centers on a young girl named Emily (Kirra Silver returning for her second go round) and her best friend, a mouse named Amos (Alejandro Tey also back) a sassy charmer with a bright smile you can see from the second balcony, as they prepared for Santa’s annual visit. Well, hopefully an annual visit as St. Nick missed their home the previous year.  While her Uncle Brierly (newcomer Erik Pearson) played host to an array of colorful Christmas Eve Party patrons, the creatures “stirring” here soon discovered they had an adventure on their hands, they had to save Christmas. Assisting their new friend, a Jewish Elf-B-I Agent named Calliope (Nora Lise Ulrey) to recover Santa’s Naughty and Nice List, which had just been stolen a few hours before his annual sleigh-ride. Would Christmas this year actually be ruined? Not if they could help it! As this quirky trio set off (through the audience) to help find Santa’s (Anthony Whitaker) missing list, they encounter a group of quirky characters including Amos’ twin cousin, Amos of Kansas and a fallen elf who wanted to sell Santa’s list to Walmart for personal profit. 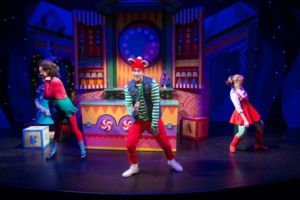 Added to the mix, a dastardly villain, a swashbuckling swordsman, Sir Guy of Gisbourne (also played by Erik Pearson), who would stop at nothing to retrieve that precious list. For a children’s show, Gaby Labotka’s fight choreography sincerely impressed. While mostly played for laughs, with added jumps and leaps for dramatic effect, this scene had the children attending on the edge of their seats. If you are worried about the show’s eventually outcome, don’t fret. This fun for the whole family yuletide treat concluded with the resonating message “courage, honesty and love” are the real gifts to share all year round. Add to that an audience wide sing-a-long of diverse holiday themed hits including “We Wish You A Merry Christmas”, “Feliz Navidad” and “Hanukkah Oh Hanukkah” and everyone left with a smile firmly planted on their faces. 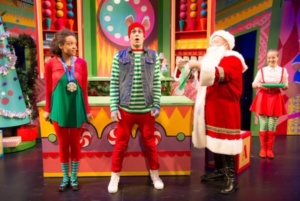 Rounding out the production’s creative team, Rachel M. Sypniewski Crayola crayon, brightly colored costumes also charmed from start to finish. William Boles rotating and collapsible set was as dreamy as anything Santa might leave for Barbie. Keith Parnham’s lighting added both drama and ambiance, punctuating each scene, and Jeffrey Levin’s Sound Design was anything but gimmicky. 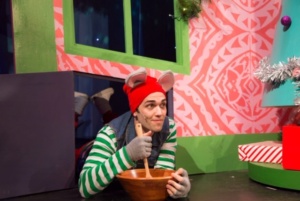 Twas The Night Before Christmas is one of two Emerald City Theatre’s current productions playing to audiences of all ages. The Fantastic Mr. Fox is simultaneously mounted across town at the Victory Garden’s Theater main stage. Solidifying their long standing tradition (Emerald City is now in their 22nd season) of producing entertaining and engaging live action theater for an audience of Chicago’s youngest patrons. These pieces are often the very first exposure to the performing arts low income children across the Windy city may actually have. Committed to assisting Chicago’s youth in all 50 wards to creatively face the world, Emerald City Theatre also continues on with their One Fund signature mission, allowing over 5,000 elementary students tickets to performances and gifting them hard cover companion books to read as well. What could possibly be better than that? To borrow a line from the original poem, “dash away, dash away, dash away all” to Emerald City Theatre presents Ken Ludwig’s Twas The Night Before Christmas while you still can. Ho! Ho! Go buy a ticket today. 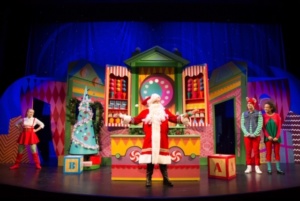 Emerald City Theatre’s Ken Ludwig’s Twas The Night Before Christmas is now playing at The Broadway Playhouse at Water Tower Place through December 30, 2018 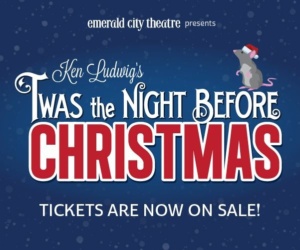 RossOctober 21, 2021
Read More
Scroll for more
Tap
Fiddler on the Roof – The Tour
Cherise Boothe is Absolutely Ab Fab in Fabulation, or the Re-education of Undine