Kenneth Cole, The Prom and The UN All Partner For the Rights of LGBTQI

Kenneth Cole, The Prom and The UN All Partner For the Rights of LGBTQI

American fashion Designer and social activist, Kenneth Cole, today announced a partnership with Broadway’s new musical comedy, The Prom, to support human rights of LGBTQI people and equality. The partnership includes a fundraising initiative for the UN Foundation in support of UN Free & Equal – a global public information campaign of the Office of the UN High Commissioner for Human Rights to promote the fair and equal rights of LGBTQI+ people globally. 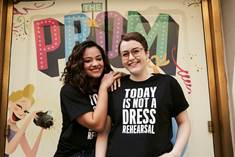 “We have been supporting social justice and equal rights issues since its inception and specifically for the LGBTQI+ community for over 25 years,” stated Kenneth Cole, Chairman and Chief Creative Officer of Kenneth Cole Productions. “We’re proud to partner with The Prom, not just because it is an extraordinary theatrical production, but also because of the shared values it portrays and the important story of inclusion and acceptance that it brings to life. “

Inspired by the Act 1 Finale of The Prom, Kenneth Cole has designed a custom t-shirt which reads, “TODAY IS NOT A DRESS REHEARSAL.”  As an official part of The Prom’s merchandise line, the t-shirt is sold at the Longacre Theatre (220 West 48th Street, NY, NY), online at www.theprommusicalshop.com, and at The Voice Shop on https://www.kennethcole.com/the-voice-shop/. All net proceeds from the sale of this t-shirt will be donated to the UN Foundation in support of UN Free & Equal.

Also available on The Prom’s official e-merch site are Kenneth Cole’s PRIDE KAM Sneakers, which are featured onstage at the finale of THE PROM and include a rainbow stripe detail so anyone anywhere can be TIED WITH PRIDE. Leading Lady Caitlin Kinnunen (Emma) dons Kenneth Cole’s Swarovski Crystal KAM Sneaker and Isabelle McCalla (Alyssa Greene) wears the Silver Glitter KAM Sneaker, both of which have the rainbow stripe (the signature element of the PRIDE KAM sneaker) added to them.

Additionally, as part of the partnership, the December 4 performance of The Prom will be followed by a post-show talkback moderated by Rajesh Mirchandani, UN Foundation Chief Communications Officer and featuring panelists including cast members from The Prom, Kenneth Cole and Fabrice Houdart, Human Rights Officer, Office of the UN High Commissioner for Human Rights (OHCHR).  In addition to these distinguished guests, The Prom will also host past cast members of Kenneth Cole’s Courageous Class and Pride Advertising Campaigns as well as members of the UN LGBTI Core Group. “The Prom helps us understand that in every community around the world the protection of human rights is a living issue. Bringing together artists, civic activists, corporate partners, diplomats and the Office of the UN High Commissioner for Human Rights will help audiences not only understand that over the last 70 years the UN has helped build a global framework for human rights, but also that we all need to stand up to ensure everyone, everywhere is free and equal,” said United Nations Foundation Chief Communications Officer Rajesh Mirchandani.  All patrons for that evening’s performance are invited to stay for this post-show discussion.

In celebration of The Prom’s official opening night, Kenneth Cole will launch a sweepstakes on Thursday, November 15 to enter-to-win a pair of tickets to this special December 4 performance of The Prom including a post-panel meet-&-greet with Kenneth Cole and members of The Prom cast, plus additional prizing to be announced!

“The Prom shows that Broadway comedy can be a great vehicle to raise awareness of human rights challenges experienced by lesbian, gay, bi, trans, intersex and queer people. UN Free & Equal is delighted to partner with this show to reiterate that all media have a role to play in tackling homophobia and transphobia.” Said Veronica Birga, Women’s Human Rights and Gender Section, OHCHR

Kenneth Cole is an American designer, social activist, and visionary who believes business and philanthropy are interdependent. His global company, Kenneth Cole Productions, creates modern, functional, and versatile footwear, clothing, and accessories for inspirational urban lifestyles under the labels Kenneth Cole New York, Reaction Kenneth Cole, and Unlisted, as well as footwear under the label Gentle Souls. The company has also granted a wide variety of third party licenses for the production of men’s and women’s apparel, fragrances, watches, jewelry, eyewear, and several other accessory categories, including children’s footwear. The company’s products are distributed through department stores, better specialty stores, company-owned retail stores and its e-commerce website.

Over 35 years ago, Kenneth Cole leveraged his passion and unique brand platform to make a meaningful impact on people’s wardrobes, as well as communities in need. He did what others didn’t and said what others wouldn’t. Today, The Kenneth Cole Foundation remains committed to helping communities in need by supporting Public Health and Civil Liberties.

The Prom is now in performances at Broadway’s Longacre Theatre (220 West 48th Street) and officially opens on Thursday, November 15, 2018.

The UN Free & Equal campaign is an unprecedented global public information campaign aimed at promoting equal rights and fair treatment of LGBTI people. It was launched by the United Nations Human Rights Office in July 2013 and has since reached hundreds of millions of people globally through traditional and social media as well as generated a stream of widely shared materials – including powerful videos, impactful graphics and plain-language fact sheets. For more information please visit www.unfe.org.