“The only people for me are the mad ones, the ones who are mad to live, mad to talk, mad to be saved, desirous of everything at the same time, the ones who never yawn or say a commonplace thing, but burn, burn, burn like fabulous yellow roman candles exploding like spiders across the stars.” Jack Kerouac, On the Road 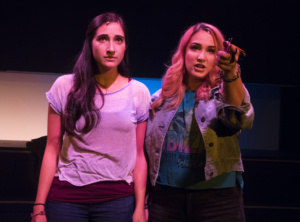 There are many forms of loss and the new musical by Kait Kerrigan and Brian Lowdermilk, The Mad Ones, unlocks the layers of how we can lose ourselves and the reasons why. A lot of the story is predictable, but that really doesn’t matter. 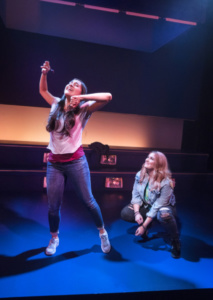 It is dawn, and Samantha Brown (Krystina Alabado; American Psycho and American Idiot) needs to break free. She is frozen in time and can’t turn the key in the ignition. She is filled with doubts as her best friend, Kelly (Emma Hunton; Next to Normal and Spring Awakening) makes her remember why she is so stuck. We meet her statistician, overbearing mother (Leah Hocking) who fills her life and Samantha’s with facts that are terrifying. Samantha’s boyfriend, Adam (Jay Armstrong Johnson; On the Town and Hands on a Hard Body), is her rock. Not very bright, not very ambitious, but steady, and most importantly, he loves her unconditionally. 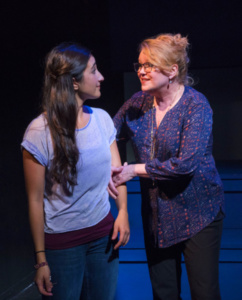 Krystina Alabado, Leah Hocking Photo by Richard TermineSamantha fails her driving test 4 times. Kelly loves to take off into the wind and ironically Kelly gets killed by a car. You see, Kelly is here to make Samantha rise again and become a phoenix instead of a deer in headlights. Kelly wants Samantha to face her fears, and in the end, she finds her freedom and herself. 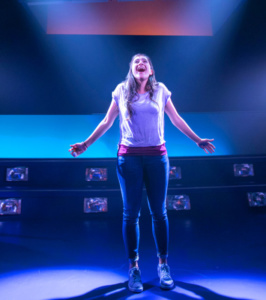 Krystina Alabado Photo by Richard TermineKrystina Alabado is sweet and wonderfully insecure with a soaring voice that knows just when to go soft. Emma Hunton, like Kelly, is a force of nature, stealing the show with her supernova charge and her rock-solid vocals. Leah Hocking has the most defining moment when she fears for her daughter who doesn’t want to go to the Ivy League School she has gotten into, but would rather find herself on the road. Hocking sings about the difference between the male species vs. the female. We will be hearing “Miles to Go” for a long time. I expect it to be the new anthem of how little we truly have progressed. Jay Armstrong Johnson took over this role with very little time when Ben Fankhauser was put on vocal rest. Jay once again proves his down to earth take on a role. We fall in love with him when he sings to Samantha “Run Away with Me,” letting us know he will always be there for her. Johnson is in through December 3.

Stephen Brackett (Buyer & Seller) keeps this show youthful and on the run.

Kerrigan’s and Lowdermilk’s music says it all. At one point, I closed my eyes because the music was so emotionally driven, and I was in ecstasy at the intricacy of the melodies. Their songwriting is up there with Paske and Paul. At times, the score almost sounded like an extension of Floyd Collins. It is no wonder they won the 2006 Jonathan Larson Award, a Richard Rodgers Award, and Kerrigan’s 2009 Kleban Award for Most Promising Librettist.

Kerrigan, who played the violin on many of the arrangements, centers her lyrics on the intensity of relationships. She probes deeply, and with Lowdermilk’s soaring melodic journeys you are sure to end up in a place that hits close to home.

Adam Rigg’s set and David Lander’s lighting is on target.

All I can say is I was on the road with The Mad Ones and can’t wait to hear more of the cast and Kerrigan and Lowdermilk.

The Mad Ones: Prospect Theatre, 59E59 Theaters until Dec 17th.

Suzanna BowlingMay 17, 2022
Read More
Scroll for more
Tap
Hot Mess Where The Girl Gets The Guy From The Guy
Golden Boy: A Charming Classic