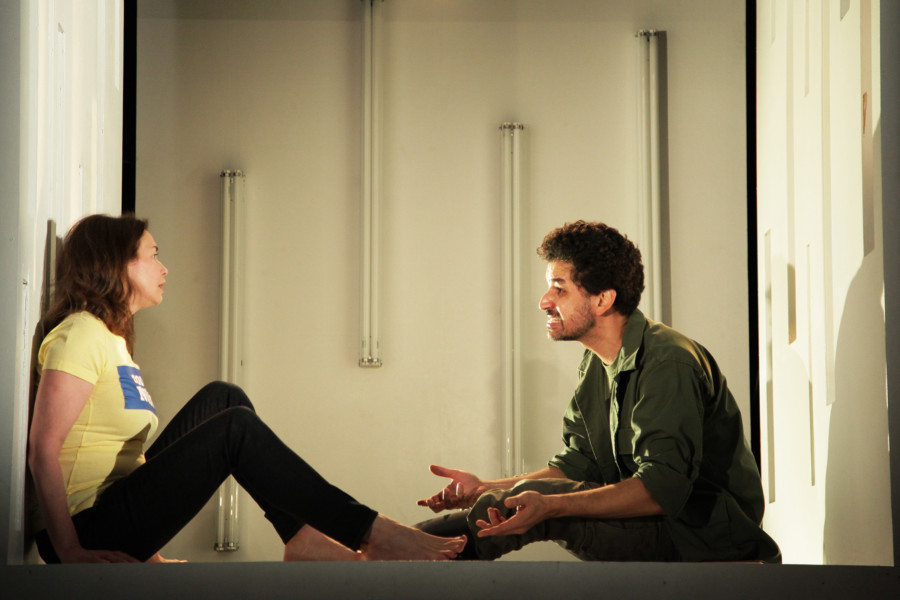 Kidnap Road: A Picture of Corruption and Trauma

Kidnap Road: A Picture of Corruption and Trauma

Catherine Filloux’s Kidnap Road is inspired by the kidnapping of Colombian politician and activist Ingrid Betancourt. Told in flashes of memory, the trauma of Betancourt highlights political corruption and the unjust treatment of women in politics.

The action of the play is not chronological – which makes it tricky to follow in the beginning, but as stories and themes repeat, we can slowly put together a timeline of the kidnapping and the events that follow. We learn more about the captured woman via scenes with her captors, her father, her children, her lover, and the god of her conscious. Every moment gives insight to her life and her torture.

Though Kimber Riddle and Marco Antonio Rodriguez deliver a steady performance, the production fluctuates between intriguing and stagnate. Riddle spends the whole of the play inside a large box, while Rodriguez moves freely in and outside of it as he molds seamlessly from one character to the next. Under the direction of Elena Araoz, the symbolism of a physically limited woman who is constantly affected and restricted by the actions of a man is not lost in a personal and/or political context.

The main achievement of the play is the design. The set by Justin Townsend, lighting by Michael McGee and sound by Nathan Leigh are cohesive and it is ultimately that which draws us into the action – which is a combination of memory, delusion and conversation.

Suzanna BowlingApril 9, 2021
Read More
Scroll for more
Tap
Strictly Ballroom: Still In Need of Some Sparkle and Heart
Marry Me A Little – I Do!