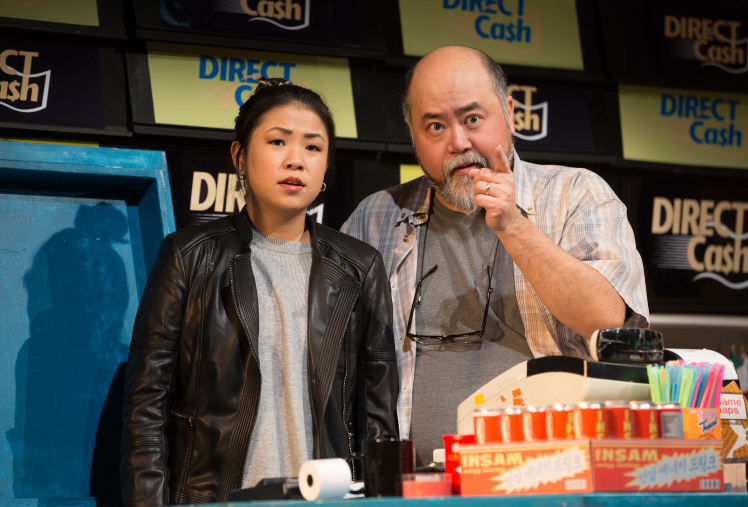 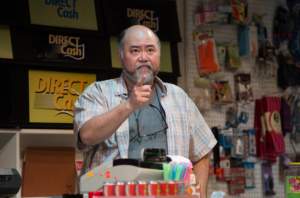 Today, it seems, is the day for truth to come out at Kim’s Convenience, the beautifully crafted play brought to us by the award winning Canadian theatre company, Soulpepper that has literally taken over the Pershing Square Signature Center. Just one of numerous productions brought from Toronto to New York for the month of July, this is a loving and thoughtful introduction to the company. Basically a typical but immensely engaging story of first generation immigrants and their children. Ins Choi has written a story about a North Korean couple, who fled for Canada during the Korean War and set up a life and a convenience store in order to survive and raise their two children. But as my theatre companion said, this story is more universal. It is just like his family, one that fled Mussolini’s Italy for Chicago. His father is this father, and he is that child (I won’t reveal which). 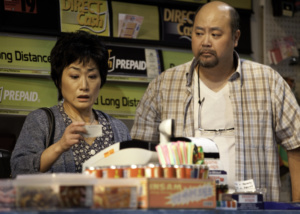 As authentic as that meticulously designed store by Soulpepper company set and costume designer, Ken MacKenzie (with impeccable lighting by Lorenzo Savoini, and sound design by Thomas Ryder Payne), the cast come as close to inhabiting the parts and the environment as one could hope for. It feels every inch like a Toronto convenience store, like the ones I see when I go home to visit my friends and family. It’s hard to pin down how or why it feels so true and so Canadian but from my first glance I knew where I was. There is a unique difference in Kim’s Convenience to the overly packed corner delis and bodegas that occupy every corner of New York City, and even without the Canadian flag on the back wall and the cigarettes hidden behind a cover, it is as authentic as the people who inhabit it. 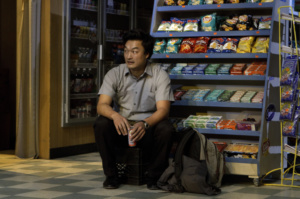 Paul Sun-Hyung Lee as Mr. Kim, or ‘Appa’, the father, has all the loving complexities of a man who has given up so much joy and personal pride for his family and their new existence. The portrayal is layered, touching and innately funny, almost instantly making us compassionately connect to this basically content and proud man. He sings or hums to himself as he opens up shop, pulling us into his orbit with every sigh and musical inclination. Even in the moments when he is unfairly attacking his equally real and complex daughter, Janet, played wonderfully by Rosie Simon, we can’t help but hold him in a great empathetic embrace. His wife, Umma, played by Jean Yoon, further creates a feeling of true familial bonds in her grunts and the loving and engaging way she speaks to her husband in Korean. It’s profoundly solid ground Choi places these three with his intricate and simple story-telling and dialogue. It is no wonder the piece is considered the most successful Canadian play in recent history, and has spawned a television show and numerous re-staging. This family just feels right.