King Kong a Musical in Search of a Era

King Kong a Musical in Search of a Era

I have been waiting for King Kongon Broadway since I first discovered a video of it on YouTube. The music was exciting, the monochromatic color scheme, the skyscrapers adding another dimension, the pastiche takes on popular songs of the time, all took my breath away.

The production of King Kongthat arrived on Broadway is musically a mess, has no script in which to speak of, is an ADD nightmare, is over-directed and choreographed, has a confusing Ann Darrow, and because of the California fires, has a projection scrim that is devastating. What the show does have is the amazing King Kongcreated by Global Creatures, voiced by the fabulous Jon Hoche. We feel for this king of the beasts with his sad eyes, emotional impact, and heart-wrenching ending. The “Voodoo Operators” of Kongdo not detract us from falling head over heels with this god of the jungle.

Scenic and set designer Peter England has given this show a feel of a cross between cinema and theater, as waves roll to make us seasick and we go zooming past a burning NYC. If you have motion sickness, you will feel pangs of nausea. 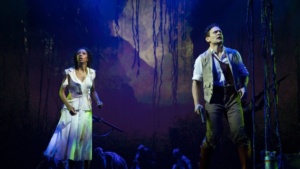 Jack Thorne, author of the Tony Award-winning play, Harry Potter and the Cursed Child, has lost his touch with this piece in the telling of Ann Darrow (Christiani Pitts). She comes to NYC to become a star. The problem is, she can’t act. Now, this left me seriously confused. You come to New York in the middle of a depression and you are this feminist who uses men and Gorilla’s to pave your way, they tell you can’t act – and as far as the audience can see, you can’t – yet you think you can be the “Queen of New York”. I just do not understand this logic. The fact she gets a conscious way too late does not help make her redeeming. 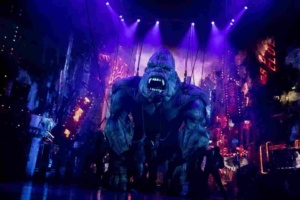 Eddie Perfect’s score is horrific. The only song that has any melody is “Full Moon Lullaby”, not written by Perfect and not sung well by Ms. Pitts. She does, however, sing the rock numbers well, but they make no sense as they do not fit the 30’s era. Ironically, Kongalso has a score by Marius De Vries, sound design by Peter Hylenski, and lighting by Peter Mumford which is highly cinematic, if not frenetic and again, not in the period. For that matter, neither is the dialogue (Thorne) or the choreography by Drew McOnie. Mr. McOnie’s choreography needs to have its own dance company. It’s not that it is bad, it’s that it just doesn’t fit the era or fit into the show. It is so overdone that my ADD brain was on overload. 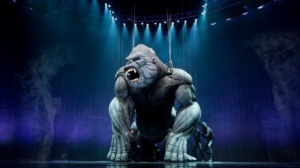 As for direction, Mr. McOnie’s vision lacks consistency and continuity.

Eric William Morris as film director Carl Denham has stage presence and can put across a song. As for keeping our interest in Ann, Lumpy (Erik Lochtefeld), a kindhearted soul who shows some kind of heart, is given stage time. 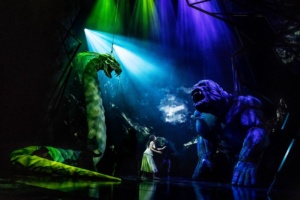 Again, the puppetry is amazing as Kong battles an enormous snake and we feel his pain at getting bit. While at Skull Island, we also see Kong’s love of his home.

Is this show interesting to watch, yes, but then again, I melt for a puppet who asks you to love them with their eyes and their subtle vocal cries.