King Kong Could Soon Be On Broadway

King Kong Could Soon Be On Broadway 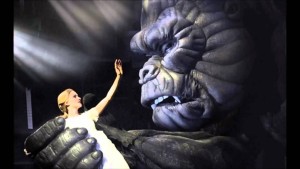 I have been waiting for two years to announce this, King Kong is finally coming to these shores. However, what I have been so excited about may not be the version that has thrilled me since I saw this video. 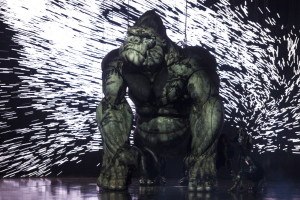 An industry reading of the new musical took place February 19th at the Baryshnikov Arts Center. The show stars Lora Lee Gayer as (Ann Darrow), Marc Kudish as (Carl Denham) who has some of the best songs in Australian version, Euan Morton is (Jack Driscoll) the love interest, Sam Foster (King Kong), Benny Elledge (Voice of Kong) and Cole Edelstein (Young Jack). Robert Creighton plays Benny a role not in the Australian production.

The show is being helmed by Tony Award-nominee Eric D. Shaeffer, with a book and lyrics by Tony and Pulitzer Prize-winner Marsha Norman and a score by Marius De Vries and Tony Award-winner Jason Robert Brown. Choreography will be by Tony nominee Joshua Bergasse.

King Kong ran in Australia is 2013, and would have been here except the only theatre it could go into was the Broadway theatre due to it’s fly space. The theatre went to another Australian show… Zhivago, instead of what would have been a hit. In Melbourne the show won five 2013 Helpmann Awards (the Australian equivalent to the Tonys). This version had a book by Tony Award nominee Craig Lucas and features a six-meter-tall puppet desgined by Global Creatures who partnered with animatronics workshop The Creature Technology Company that brought the massive  ape to life. Composer and arranger Marius de Vries, whose credits include the soundtracks for “Moulin Rouge” and “Romeo + Juliet,” created and oversaw a score that features revamped versions of 1930s Broadway classics like “Get Happy,” “I Wanna Be Loved By You” and “Brother Can You Spare a Dime” as well as new and existing songs from a mix of contemporary artists: Robert Del Naja from Massive Attack, Sarah McLachlan, Justice, Guy Garvey from Elbow and The Avalanches. A key collaborator on the musical landscape for the show is Stephen Pavlovic from Modular People; Michael Mitnick has contributed lyrics to several new compositions.

There is hope though Jason Robert Brown commented (in an article in December 2015) that “portions of the show’s Australian score…will remain intact. Hopefully that includes the revamped versions, “Special FX” and “The Greatest Show On Earth.”