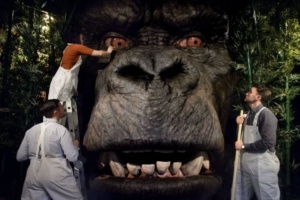 Madame Tussauds in partnership with Legendary Pictures and Warner Bros. Pictures have brought King Kong back to New York. The new exhibit is called KONG: Skull Island, and is a multi-sensory experience based on the upcoming film starring Tom Hiddleston, who plays Captain James Conrad. The British actor is also immortalized in wax. The film opens March 10th. Take a journey through the jungle and come face to face with an 18-foot tall animatronic head of that ape who stole our hearts while trying to save Fay Wrey.

“Its size and scale is true to the actual mythical Kong himself, if he were standing here”, said Eric Fluet, head of marketing and sales at Madame Tussauds New York. When he roars, it’s 90 decibels, which is equal to a Boeing 737 coming in for landing. The head can also grunt, snort and roar.”

G. H. HARDINGJanuary 23, 2023
Read More
Scroll for more
Tap
Wrestling Comes To Times Square in Beat the Streets
Kristen Stewart In Town To Promote Personal Shopper Along With A Review