King Richard One Of The Best Films Of The Year King Richard One Of The Best Films Of The Year

In 2014 Richard Williams, the father of tennis legends Venus and Serena wrote a memoir entittled  Black and White: The Way I See It. His childhood saw a lot of racial injustice and beatings by both Black’s and White’s, which has left scars. Half sports movie, half biopic “King Richard” focus mostly on Williams the hard-working driven family man who has a plan for his family. He is focused and doesn’t care what it takes to put his girls on top. At the same time he cares about his girls being well rounded and people he can be proud of. Williams prioritized their mental health and happiness over their careers. He was well known for overriding the rules of the games and steamrolling the desires of those people closest to him, especially the female family members. He is a uneducated Black man bring up Black girls from Compton and his plan is to bring them to the attention of the best tennis coaches in the country.

Will Smith embodies “King Richard” a man who is always on the make. He is larger than life, We see the brutality of the world he is in and his focus to be more that what life has to offer him. He is so dead-set on his vision for the family’s future that he forgets that his wife, Brandy (Aunjanue Ellis), has coached these girls just as much as he has. One of the best scene’s in the movie is when Brandy confronts Williams with his past and present grievances. She has had enough of her husband’s self-martyrdom. The electricity between Ellis and the prideful Smith is spectacular.

What is missing is Venus (Saniyya Sidney) and her younger sibling/best friend Serena’s (Demi Singleton) feelings. We get glimpses, but like the man being portrayed Williams  refuses to acknowledge anything besides his own opinion. Williams drafted a “plan” for his daughters Venus and Serena before they were born. The plan stated they would become enormous tennis superstars. There will be no deviations, neither from that fact or from his reality of the truth. Smith definitely deserves the nomination, but the person who deserved the nod and the win is Aunjanue Ellis whose layered acting skills makes every scene she is in riveting. 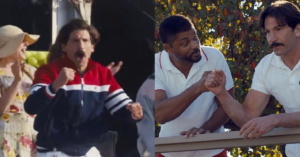 Also giving a wonderful performance is  Jon Bernthal as the frustrated coach Rick Macci and Saniyya Sidney and Demi Singleton. 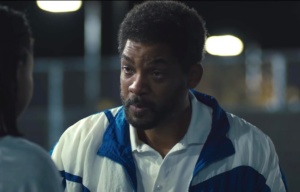 The screenplay by Zach Baylin drags, but the direction by Reinaldo Marcus Green gives us life in the 90’s. 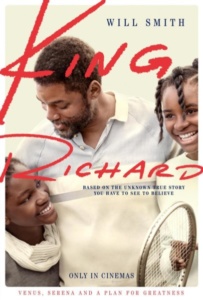