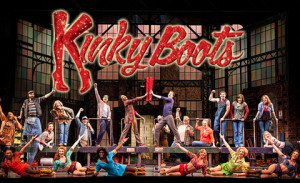 Producers Daryl Roth and Hal Luftig are thrilled to announce that the hit musical Kinky Boots celebrated their three-year anniversary on Broadway April 4, and is now that the longest running show to ever play the Al Hirschfeld Theatre (302 West 45th Street), a record previously held by the original production of The Man of La Mancha. The winner of six 2013 Tony® Awards, including Best Musical, Kinky Boots features a Tony® Award-winning score by Cyndi Lauper, a book by Tony® Award-winner Harvey Fierstein, direction and choreography by Tony® Award-winner Jerry Mitchell, and opened to rave reviews on April 4, 2013.

This video includes Kinky Boots companies from around the Globe, including London, Australia, Japan, Toronto, and the National Tour, congratulate the Broadway cast on entering their 4th smash year on Broadway.

To help celebrate this milestone, Cyndi Lauper and Harvey Fierstein will also be honored with a double star ceremony on the Hollywood Walk of Fame on Monday, April 11.

Suzanna BowlingSeptember 15, 2022
Read More
Scroll for more
Tap
Celebrate The Opening of The Crucible with Joan Copeland
And The Winners at The Oliver Awards Are………..