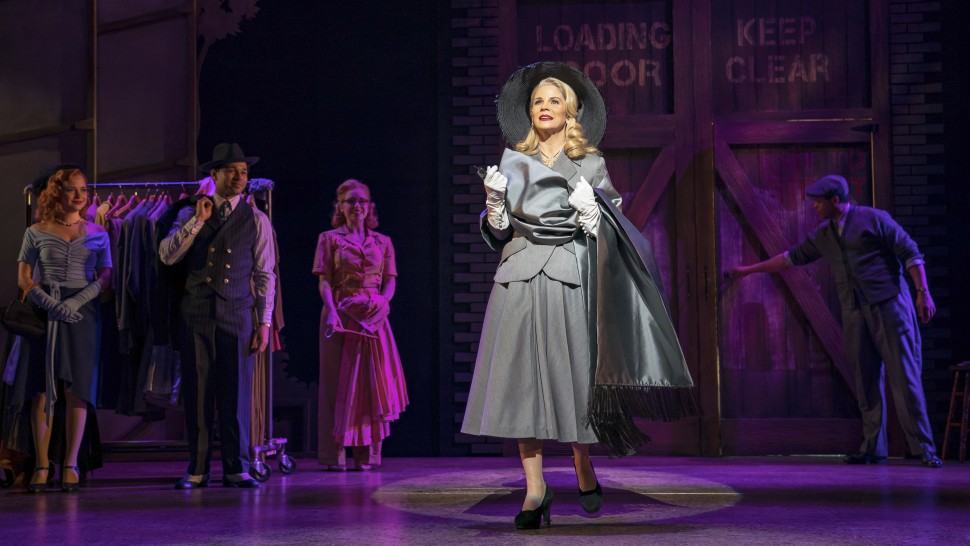 Kellie O’Hara sings Cole Porter’s score gloriously, especially in “I Hate Men”. Her vocals are unsurpassed. She also brings comedic timing and a sophistication to the role of the hell cat with a temper, but we never see her as anything but lovely and a little miffed. Even when she plays the shrew Kate and she is kicking Petruchio, she is not somebody who is out of control. We never see the unleashed diva who is so furious that her ex is courting another. There is no I hate you/I love you to play off of, which is what this show is about, and I blame this on Amanda Green’s rewrites and Scott Ellis’s direction. Originally, Lilli leaves without Howell, she then comes back to sing “I Am Ashamed That Women Are So Simple”, but the song has been changed so the ending falls flat.

Before it was the words of Shakespeare set to music:

I am ashamed the women are so simple
To offer war where they should kneel for peace,
Or seek for rule, supremacy, and sway
When they are bound to serve, love and obey.

but that has been turned into universal love and it makes no sense why Kate or Lili would return:

I am ashamed that people are so simple
To offer war when we should kneel for peace
Or seek for rule, supremacy and sway
When everything but love must die away.

I understand that times are changing, but really must we rewrite Shakespeare? Kiss Me Kateis one of my favorite musicals with a strong score and a timeless story, and though there is much to like here, the second act after “Too Darn Hot” seems to fall apart.

The choreography by Warren Carlyle is top notch with tap, gymnastics, and the sweat inducing “Too Darn Hot” and “Bianca”. Corbin Bleu jumps and taps his way into our hearts reminding me of a young Gene Nelson. Coupled with the phenomenal vocals of Ms. O’Hara makes this why you should see this production. Also, a shout out to James T. Lane who understands hot!

For those who do not know this story, the show is about two former lovers who are doing a musical version of Taming of The Shrew. The “real life actors” roles mirror their real life. Lili is to marry another, and this is her farewell to showbiz, though she still harbors strong feelings for her ex. Unfortunately, her ex is into Lois Lane (Stephanie Styles), but Lois loves the gambling Bill Calhoun (Corbin Bleu) who has lost 10g’s and signed Fred’s name to the IOU. Wise Guys (John Pankow and Lance Coadie Williams) show up and all hell breaks loose.

Stephanie Styles, though adorable, has no chemistry with Bleu, but maybe it’s because unlike the Lois’s before her, she doesn’t exactly dance as she does get lifted. She does have a killer belt. During the normally subtle “Tom, Dick, or Harry” where it is a play on words left to your imagination, now everything is sexually spelled out and it seems misplaced for the era.

It is hard to understand why Lili would ever fall for Gen. Harrison Howell (Terence Archie). Also, John Pankow and Lance Coadie Williams as the mobsters who find a love of theatre in “Brush Up Your Shakespeare” seem uneven and the song misses its one-two-punch, which is normally a highlight of the show.

Even the orchestrations here seem to pale to other productions, yet this score is timeless and oh so “Wunderbar.” I miss this kind of lush melody with witty lyrics, that are oh so naughty and oh so right.