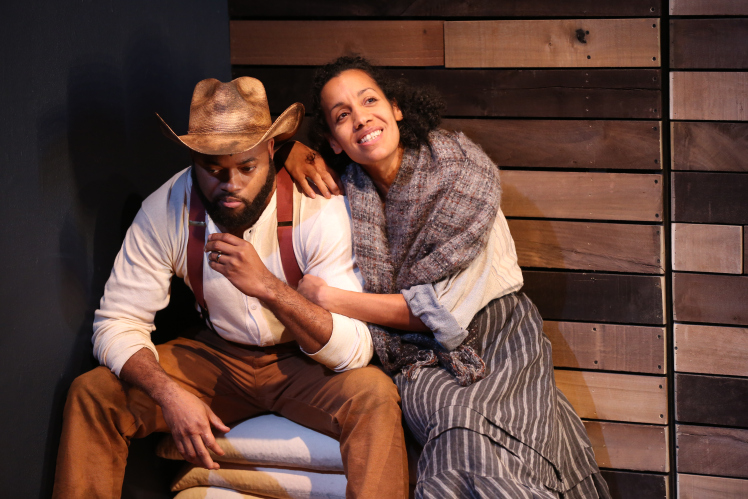 Knives in Hens: The Cool Hard Stone and The Quest for More.

Knives in Hens: The Cool Hard Stone and The Quest for More. 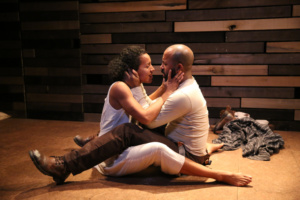 Considered by many across Europe to be a modern Scottish classic, this atmospheric fable from 1996 that first premiered at the Traverse Theatre in Edinburgh is a brutal fable of awakening consciousness. It’s a complex study of the battle between animalistic carnality and acquired knowledge that is both powerful and insistently poetic. Written by David Harrower (Blackbird), Knives in Hens is making its NYC premiere courtesy of The Shop at 59E59 Theaters. In the small intimate space of Theater C, this stark play is placed up close and within arms reach, re-imagined most effectively from the Scottish landscape to the quasi-mythical old American frontier. With a uniquely multicultural cast, this tense and brave production retains much of it’s critique of the pastoral myth, along side a impassioned study in the equivocal nature of language. It feels perfectly at home in the dusty farmland of old Americana, so much so that the musicality of the language is hard to imagine elsewhere. Surprisingly though, with so much intensity and engagement from the talented cast, Knives in Hens remains head bound, and doesn’t translate down into our heart and our emotional core. For a play that speaks to the struggle from passivity and religiosity towards enlightenment, in the end, it may have taken that battle too seriously as the learned soul comes out of this the winner. 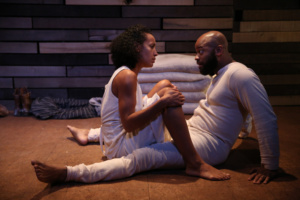 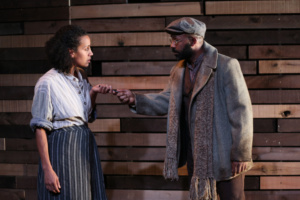 The simplistic power of this fable is imbued with the subtle strength of words and a fierce desire for liberation above and beyond the foolish superstitions held by the town. Every intense word spoken by the ploughman and his wife echo that fierceness and passion, but the experience brought forth very little emotional response within my soul. Although Harrower’s seminal work suggests an inner quest for knowledge and freedom from the norm, the play and this production is surprisingly unmoving. Even the beautifully choreographed act of liberation and violence by the Miller and the ‘Young Woman’ did not register beyond the intellectual bounders. We are left to try to solve the puzzle of the fable, and attempt to unpack the ending, leaving very little room for emotional response. I left Knives in Hens slightly confused, eager to understand, but emotionally as cold as the stone wheel at the Miller’s.

Suzanna BowlingSeptember 16, 2020
Read More
Scroll for more
Tap
A Night with the Dead: In Need of Some Life
And It Begins: Anthony Rapp Has Accused Kevin Spacy of Inappropriate Behavior