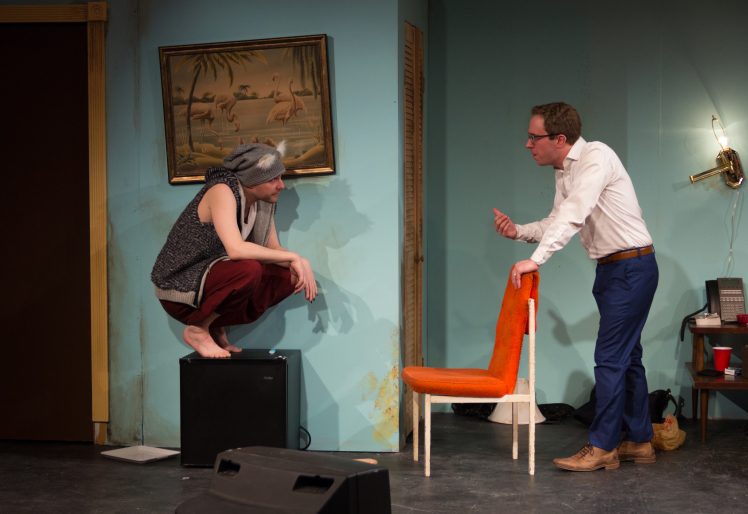 Koalas are Dicks: An Australian ‘Ted’ Comes Alive For Better or Worse

Koalas are Dicks: An Australian ‘Ted’ Comes Alive For Better or Worse

Have you seen the movie, “Ted“? The one that stars Mark Wahlberg as a man whose childhood wish of bringing his teddy bear to life comes true, but then must decide who is more important in his life; his hot girlfriend, Lori (Mila Kunis) or his foul mouthed teddy bear, not surprisingly named, Ted. I have not, just to be clear.  It is probably a funny movie, but it’s definitely not ‘my kind’ of film.  I tend to shy away from this type of frat-boy adolescent humor, so, to be entirely up front, I.m guessing that I am not the intended audience for Koalas are Dicks, a new play by Larry Phillips (FringeNYC 2016’s Best Play nominee, The Rise of Mediocrity) because that is exactly what kind of play this is.  I must admit that I am probably the worst person to review this type of play, to be fair. But here I go, and I promise to be thoughtful and not brutal, because, to be honest, it’s a fairly well structured play; a decently crafted ride from start to finish. It’s just not for me.

Brody, played with a loutish shit-eating grin by Peter Buck Dettmann (American Theater of Actors’s Othello), is America’s favorite TV sitcom-star koala. In the public’s eyes, he is the most lovable and charming of any marsupials you may meet (who is a working TV series star), but those around him know him as more like the Charlie Sheen of Koalas.  Holed up in a sleazy LAX motel with his wrangler, played by the funny and comically interesting Tiffany Mae McRae (59E59’s G.I. Joe Jared) and his dim one-man entourage, Davey, played with a ridiculous silly grin by the over acting but game Larry Phillips (Adam Szymkowicz’s The Why Overhead), Brody has gone wild.  He has decided he is done with it all; with his popular sitcom and his huge star status and salary. With just 12 episodes away from syndication, his agent, Ross, played by a fairly solid Patrick T. Horn (Irish Rep’s The Dead) tries desperately with all his smarmy intellect to lure him back to the set, but Brody and Davey have other ideas. Sailing into the room, past the flash bulbs of the paparazzi, are Brody’s co-star, Allison, played with sly wit by Phoebe Leonard (Rebel Theater’s Salome) and an LAX hooker, played by Griffin Hennelly (Breakfast in Cold Blood) with a sweet smile and abs that are definitely not made of steel (maybe from numerous muffins, alcohol, and/or drugs). Once the gang is all assembled, the madcap hilariousness should be in full swing, and it is, if adolescent humor and ridiculousness is your cup of tea. If not, the play tends to wear pretty thin even as it merrily rolls along.

Brody has enough booze and drugs to last for months, and a strong desire to drink and snort as much as any Koala can. Phillips does an interested thing with a talking koala that no one can actually hear except for us, and a team of desperate players all looking to score something by the end of the day.  He does write in a few surprises and a few good jokes within this clear-cut pathway to an ending that one doesn’t see coming, without ever being bogged down in logic or deep thought.  Directed by Ben Liebert (Redhouse’s The Bomb-itty of Errors) with a pretty sophomoric flair for comedy, Koalas are Dicks creates the silliest of situations filled with the dirtiest and most juvenile of jokes and pratfalls, but they are well played by the cast, played out in the filthiest of a true-to-life set by Meg McGuigan (Shakespeare Society’s Romeo and Juliet) with lighting by Erik Fox.  If this is your kind of humor, and it seemed that I was surrounded by such folks the night I saw it at Theatre 80 at St. Marks, you’ll have a good time and you won’t sweat the small stuff, enjoying the raunchy humor of this play.  If it is not, and I’m definitely in the camp, you will tend to get a bit worn out as the tale keeps barreling forward towards its some-what satisfying ending.  It is a dark Hollywood comedy about fame, friendship, ruthless ambition, all revolving around a foul-mouthed celebrity marsupial, but not the smart kind of darkness I usually want from my comedies. I wish a few more brain cells stayed alive and inhabited the script rather than dying off in the barrage of drugs and alcohol consumed on stage, but I might be in the minority when it comes to its target audience.

Suzanna BowlingSeptember 11, 2022
Read More
Scroll for more
Tap
Cardinal: A Town Without Pigment
Barbara Cook’s Jewelry and More To Be Auctioned Off At Doyle’s