When KPOP played at Are Nova, you were led around from room to room and followed the KPOP stars on their journey to stardom. In one of the rooms a manger asked “why KPOP was not popular in the US.” I raised my hands and said because we can not sing along with it. There is no emotional connection. I was told I was racist for this, but that is a fact. Now the new version on Broadway has proven me right, not that I ever wanted to be.

This version, which has landed on Broadway is stylish, with fabulous costumes by Sophia Choi and Clint Ramos. Rock star lighting by Jiyoun Chang and choreographed to aplomb by Jennifer Weber, which is sure to catch on. The cast is talented and sings and dances up a storm. As a concert it is spectacular, with notes belted to perfection.

However what was wonderful at ARS Nova, has been lost in translation at the Circle in the Square Theatre. Book writer Jason Kim has turned this into a K-Pop A Chorus Line, without the emotional pull. Instead we get a villainous videographer Harry (Aubie Merrylees) looking for his own fame trying to exploit what he can.

Director Teddy Bergman has created a concert being filmed and instead of the dramatic plot points, the story just misses the mark. Gone is how much production companies use and abuse their stars telling them when to eat, what to where and owning each and every piece of them. Gone is the fact that the star who is turning 30 is about to be replaced with one of the younger stars in the girl group. These were part of what made the original K-Pop show fabulous. Here we see the K-pop label run by the one time star Ruby (Jully Lee) dealing with the repercussions with how she has treated MwE (former K-pop star Luna, missing the night I saw the show. Understudy Amy Keun was on). We see in flashbacks that her mother rejected her and then the exploitation by Rudy who seeks perfection. MwE struggles to escape as the music label tries to infiltrate the illusive U.S. market. 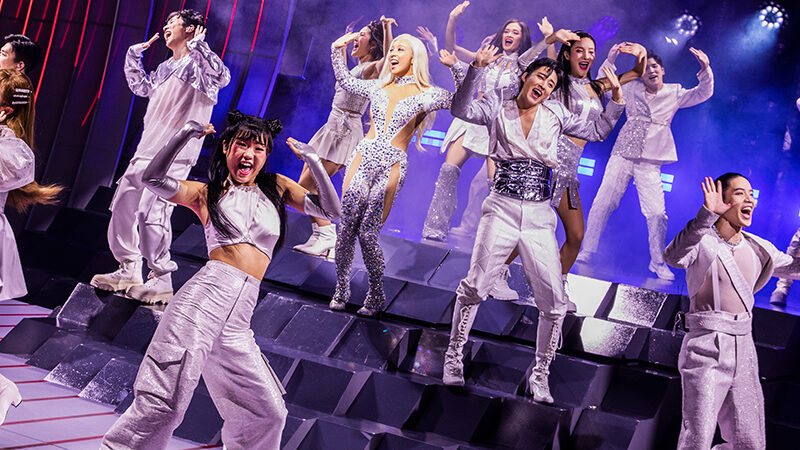 The cast of KPOP. Photo by Matthew Murphy.

The concert is bubblegum excellence with Helen Park and Max Vernon K-pop inspired tunes. However the music is caned and sounds flat. Since this show has boxed itself into only K-Pop music, the “I want songs” and songs that move the plot forward are missing. Ruby, one of the major characters never gets her own song and it is bluntly obvious. Maybe part of my experience had to do with seeing the understudy who had soaring vocals, but not the star power. This is her Broadway debut after all.

Standing out the night I saw the show were Jully Lee as Ruby, Zachary Noah Piser, Kevin Woo a successful Korean-American singer-songwriter and former member of K-pop boy band U-KISS and Julia Abueva.

The cast members playing the girl groups and the boy groups are really magnificent to watch as was listening to Ms. Keun, but this is suppose to be a Broadway musical and sadly it is missing too many components.