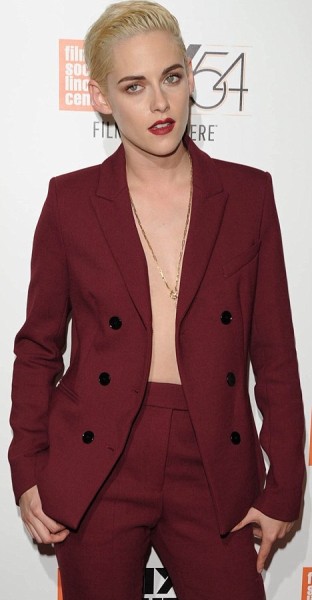 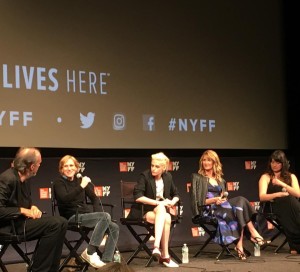 Stewart was given a special dinner organized by the Film Society of Lincoln Center, as she sat with festival director Kent Jones for a funny, self-deprecating, verbal conversation about her career.

In Personal Shopper, Assayas, who directed Stewart to a French Caesar Award (the first ever for an American actress) for Clouds of Sils Maria, reunited with her for this semi-supernatural thriller set amid the Paris fashion world. “I’ve rarely been wrong about those feelings, If I meet somebody who I really like and we don’t fall in love with each other, I’m like, Wait, wait, wait, you tricked me, you’re a sociopath. But those experiences are rare,” ” when talking about her relationship with the director. “He’s a sociopath,, but he’s doing really good things for my career.” 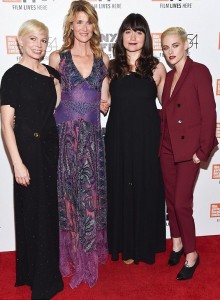 When talking about her director for  Certain Women, “Kelly Reichardt makes movies about things that people brush over all the time. I hate doing the whole ‘Let’s talk about women!’ stuff. Most female-centric stories are about the adversity that women face, and the three women in this film are really struggling, but there’s no resolve. To focus on mundane things and let people sit and be is so vulnerable. I love Kelly’s perspective. Her movies are so natural and she’s a steel train, so composed.”

For Ang Lee’s game-changing new war drama, Stewart talked about her co-star. “Joe Alwyn, who plays Billy Lynn, this was his first movie. I love working with first-time actors, especially when they’re curious. I’m like, Yeah, man, let’s f—ing talk about it!’ But he often would be asking questions to me and I was like, “I have no ideawhat’s going on.’ It was hard. Every actor went home saying, I have no idea what we did today. But that’s also a great place to be. It’s just not normal. But I would never do anything if I knew how it was going to end up.”

Stewarts next project is a  short film called Water, which she wrote and directed. “It’s pretty painterly. I’m not hiding behind anything by making the film sort of avant garde, but what I hoping everyone in the audience will stop thinking until the end. I wanted it to feel like something that washes over you. It’s the the most satisfying thing I have ever done.”