Kristin Chenoweth Back on Broadway Where She Definitely Belongs 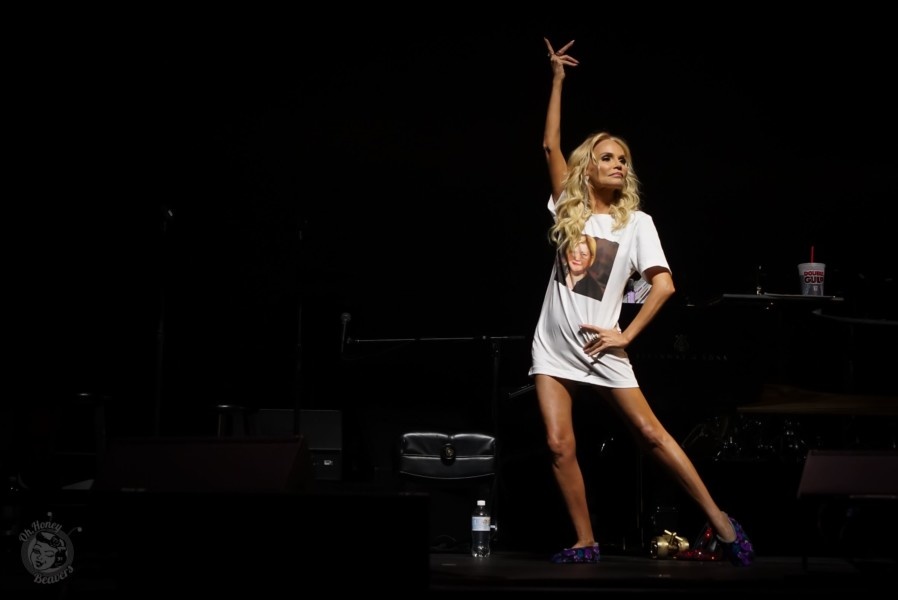 Kristin Chenoweth Back on Broadway Where She Definitely Belongs

Kristin Chenoweth is the consummate performer with her flawless voice and comedic timing. She masterfully turns any number she sings into a three act play. As the lights go down Kristin is caught in an inside out teeshirt wondering how can they start the show giving her no notice? Fans are encouraged to take pics as she jauntily poses and then tells the audience now put down your cell phones, I do not want to pull a Patti LuPone. The lights go down and the show starts again. This time with Ms. Chenoweth sparkling from head to toe.

The classic “I Am Woman” starts the show with her back-up singers Crystal Monee Hall and Marissa Rosen getting equal time on the song. Adorable lyrics turn w-o-m-a-n into K-r-i-s-t-i-n.

A song I had never heard, Trisha Yearwood’s “The Song Remembers When” was a nice introduction. Songs from Kristin’s album of the same name released September 27th, “You Don’t Own Me”, “The Way We Were”, and “Desperado” were given live renditions.

During the run Kristin has multiple guest stars. For my night the first one was Jenn Gambatese, soon to be seen in the musical adaptation of Mrs. Doubtfire and an ex Glinda. Kristin started the song “Popular”, but generously gave the rest to Ms. Gambatese. Ms. Gambatese was then given her choice to sing any song she wanted and she chose “I Have Confidence” from the film version of The Sound of Music. Though sung well, it was a strange choice.

Ms. Chenoweth’s long time musical director Mary-Mitchell Campbell has written a song called “Blessed (Millenial Song)”, which was then introduced. This song full of hashtags and emojis, is rather quirky.

The first act ended with two of Judy Garland numbers. A wonderful version of “Somewhere Over The Rainbow” and from her album “The Man That Got Away”, brought back memories. It was easy to see how these two performers compare and the differences.

The second act started with Chenoweth holding up vinyl record album of Lena Horn, listing to her on a record player. The record switches from Horne to Chenoweth’s singing “When I Fall In Love” as she raises the album cover “For The Girls”.

For me the best moment of the show came next. A wonderfully comedic and glorious version of Victor Hurbert’s “Art Is Calling For Me” showed off what Kristin does best.

Next another guest spot, this time Sirius radio host Julie James, who brought a lot of audience members with her. Making her Broadway debut Ms. James sang “Sing Happy” From Flora The Red Menace.

A luscious “Beautiful Dreamer” and Tony Bennett’s “I Wanna Be Around” followed.

A heartfelt “Hallelujah” had Kristin singing magnificently the first verse and then giving away the rest to her back up singers and then to Mary-Mitchell Campbell, who really can’t sing. At this point the generosity was going overboard.

“When Angels Land” led to bringing out Ms. James again and stating “If you don’t believe in Jesus the song is over in 4 minutes.” Both Kristin and Ms. James and you can add me, are fans of the Christian singer Sandi Patti. This woman is one fantastic vocalist. The song they chose was “How Great Thou Art”. Annoyingly Kristin sang the first verse and gave the rest, including the ending to Ms. James. Though Ms. James was adequate, she was not Ms. Chenoweth or Ms. Patti. She did not know how to hold the mike and therefore the notes were muddled and blurred.

Karen Carpenter’s “Yesterday Once More,” an inspiring “Reasons For Hope” by Mary-Mitchell Campbell and “I Will Always Love You” ended the show. The audience however was not having that so Chenoweth in a bathrobe holding her dog acappella sang a moving Charlie Chaplin’s “Smile.”

Richard Jay Alexander’s direction was haphazard, the generosity needed to be honed in, but to see Ms. Chenoweth onstage is a delight and worth the price of admission. This girl is a national treasure.

Kristin Chenoweth For the Girls at the Nederlander Theatre, will run for a limited engagement through November 17.

Make sure to catch this.

RossDecember 29, 2021
Read More
Scroll for more
Tap
How to get the Perfect Sound from Your Turntable
Brian Stokes Mitchell Sings “A Wizard Every Day” By Liz Suggs and Nikko Benson.