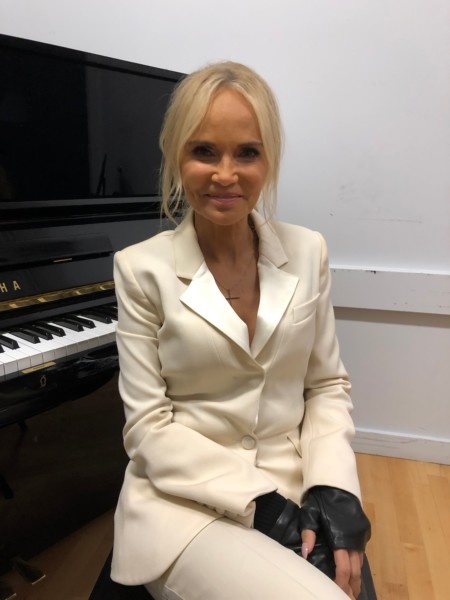 Kristin Chenoweth previewed her upcoming Broadway concert for the press yesterday at her rehearsal studio. Kristin is returning to Broadway in Kristin Chenoweth: For the Girls at the Nederlander Theatre, November 8-17.

T2c had a chance to talk to this amazing performer who has such heart and soul.

She is back with her team director Richard Jay-Alexander and musical director Mary-Mitchell Campbell. The show features two of Mary-Mitchell Campbell songs, Karen Carpenter’s “Yesterday Once More” and songs from the album. “The Man That Got Away,” “The Way We Were,” and many more will be backed up by Marisa Rosen and Crystal Monee Hall. The generous Ms. Chenoweth is also highlighting these two singers by giving them moments to shine.

Chenoweth started on Broadway with Steel Pier a show that saw her making a choice between opera and theatre. She followed that up with a Tony Award and a Drama Desk Award performance in 1999 as Sally in You’re a Good Man, Charlie Brown. Epic Proportions, originating the role of Glinda in Wicked, The Apple Tree, and Promises, Promises led to a Drama Desk Award and a Tony nomination for the 2015 revival of On the Twentieth Century. Her concert My Love Letter to Broadway at the Lunt-Fontanne Theatre in 2016 was filled to capacity. Her television credits include Glee, The West Wing, and Pushing Daisies, for which she won an Emmy Award.

On November 15th, Kristin will be releasing a stand-alone Holiday e-single titled “White Christmas.” It will be available at all digital music stores including Spotify/Apple/iTunes/Amazon/YouTube/etc.

Last December, Chenoweth performed with iconic Tabernacle Choir and Orchestra in their annual Christmas concert. The concert will air on PBS  on December 16, 2019.

RossDecember 29, 2021
Read More
Scroll for more
Tap
The Great Society a Time of Riots and War
What Criteria Should You Look for in an Event Bartending Company?