Kristina_without_interviews from Steve Elliot on Vimeo.

Kristina Reiko Cooper A Cellist You Should Know

Kristina Reiko Cooper A Cellist You Should Know 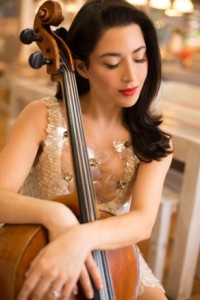 In her new CD “Around the World with Love” available May 10th, acclaimed cellist Kristina Reiko Cooper, performs a collection of love songs from all corners of the globe. “Love songs are the most sublime expression of song; every country, every culture has its own ubiquitous collection of love songs,” says Kristina Cooper. “It is fascinating how each country’s  songs of love so aptly illustrate its national characteristics and charms. The French are elegant in their reserved lyricism, the Americans, optimistic, the Japanese quietly tragic, and the hotter  countries, passionate and sultry. I am Japanese-American, Israeli, and recently converted to  Orthodox Judaism. My cello and I have traveled the globe, so this project has been a project that  speaks to my diversity both musically culturally.”

Kristina Cooper has an extensive discography of CD and DVD recordings, including many best-sellers. She has released over two dozen recordings for Arabesque, Pony Canyon Records, Helicon Records, Linus Records and CP2, and 5 DVDs for Fuji Records. In addition to her recent solo recording “Stone and Steel,” Kristina Cooper was featured in the widely broadcast “Quartetto Gelato-A Concert in Wine Country,” and recently released a solo recital DVD through Amadeus Press. Cooper has been heard often on National Public Radio, the Canadian Broadcasting Corporation, NHK in Japan, KBS in Korea, WNYC and WQXR in New York City, as well as in television broadcasts for CNN, PBS, CBC Television, CBS’s “60 Minutes,” national Chinese Television, KBS Television in Korea, Fuji Television and NHK Television in Japan. T2C sat down and talked with this funny, down to earth talent to learn more.

T2C: Your parents are musicians, when did you find your love of music?

Kristina Reiko Cooper: I was surrounded by music. My parents were young when I was born, my father was still at Julliard. I use to curl up under the piano, as my father played. I loved hearing French music.

T2C: What song made you love music?

Kristina Reiko Cooper: Listening to Bach might have been it, but the first piece that made me love the cello was “Schubert’s Cello Quintet.” It’s sublime and I wanted to play it.

Kristina Reiko Cooper: I started with piano. I didn’t want to play what my parents played. The cello is the closest instrument to the human voice. I loved to sing, but have a horrible singing voice.

T2C: What is your go to song that inspires you or just puts you into your special place?

T2C: If you hadn’t been a musician, what would you have become?

Kristina Reiko Cooper: I am a hypochondriac, so being a doctor might have been a good thing.

T2C: Your newest CD is14 love songs from all corners of the globe, what made you choose this concept?

Kristina Reiko Cooper: This is my way of singing songs. There are love songs in every culture. It’s universal! I am cosmopolitan, half Japanese, half American and I live in Israel. We also have an apartment in New York as well.

T2C: I am going to go through the countries; can you tell me your favorite composer and song from each one? Let’s start with America.

Kristina Reiko Cooper: Patrick Zimmerli who is on my album. He is a young composer and favorite song “Something Coming” from West Side Story.

Kristina Reiko Cooper: Song would have to be “Girl From Ipanema” and let’s get eclectic, Villa Lobos.

Kristina Reiko Cooper: Ravel is my all time composer and Debussy’s “La Mer.”

Kristina Reiko Cooper: Osvaldo Golijov and the song “My Beloved.”

Kristina Reiko Cooper: There are so many but I would have to say Rockmonoff and “Shostakovich Cello Concerto No. 1.”

T2C: What is in your mind for your next album?

Kristina Reiko Cooper: Two ideas I’d love to do an album of contemporary Israeli composers. I would like to do an album based on Haiku. Mu Great Grandfather Takahama Kyoshi was one of the most famous haiku poetry writers of the 20th Century

T2C: What should our readers know about you?

Kristina Reiko Cooper: That I am really excited to present this album. I picked songs I love, that were not necessary written for the cello. I want the listener to be as joyous as I was to record this. Also I am a harried mess, but I am having fun doing it.

Suzanna BowlingMay 14, 2022
Read More
Scroll for more
Tap
Broadway May Be Singing If I Could Turn Back Time With Cher Musical
The Artist Formally Know As Prince is Dead