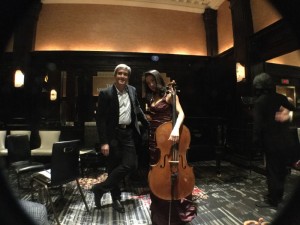 The new anticipated CD “Around the World with Love” from acclaimed cellist Kristina Reiko Cooper, will be released by Roven Records May 10th. A few select guests were invited to The Algonquin Hotel to hear a selection of these romantic love songs from all corners of the globe. For the evening Blair McMilan played the keys and Satoshi Takeishi supported the amazing cellist on the percussions. For a special number Glen Roven added his playing to the song he wrote especially for her “You Deserve A Prince.” Ms. Cooper’s rendition of “I Could Have Danced All Night” is sure to add chills. 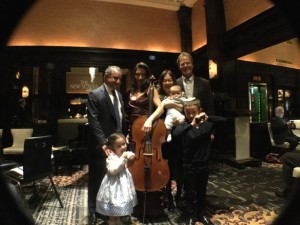 On the album America, Brazil, France, India, Israel, Japan, Mexico, Russia and Spain are all represented. Produced by Glen Roven and performed by Cooper with Or Matias at the piano, and Satoshi Takeishi on percussion, “Around the World with Love” features 14 tracks:

5. I Could Have Danced All Night – USA

9. Vu Iz Dos Gesele (Where is the Little Street) -Yiddish

“Love songs are the most sublime expression of song; every country, every culture has its own ubiquitous collection of love songs,” says Kristina Reiko Cooper. “It is fascinating how each country’s songs of love so aptly illustrate its national characteristics and charms. The French are elegant in their reserved lyricism, the Americans, optimistic, the Japanese quietly tragic, and the hotter countries, passionate and sultry. I am Japanese-American, Israeli, and recently converted to Orthodox Judaism. My cello and I have traveled the globe, so this project speaks to my diversity both musically and culturally.”

Kristina Reiko Cooper has an extensive discography of CD and DVD recordings, including many best-sellers. She has released over two dozen recordings for Arabesque, Pony Canyon Records, Helicon Records, Linus Records and CP2, and 5 DVDs for Fuji Records. In addition to her recent solo recording “Stone and Steel,” Kristina Reiko Cooper was featured in the widely broadcast “Quartetto Gelato-A Concert in Wine Country,” and recently released a solo recital DVD through Amadeus Press. Cooper has been heard often on National Public Radio, the Canadian Broadcasting Corporation, NHK in Japan, KBS in Korea, WNYC and WQXR in New York City, as well as in television broadcasts for CNN, PBS, CBC Television, CBS’s “60 Minutes,” national Chinese Television, KBS Televison  in Korea, Fuji Televison and NHK Televison in Japan.

Mitch Yuspeh and Ira Yuspeh are the executive producers for “Around the World with Love,” which was recorded and mixed at M & I Studios, NYC.