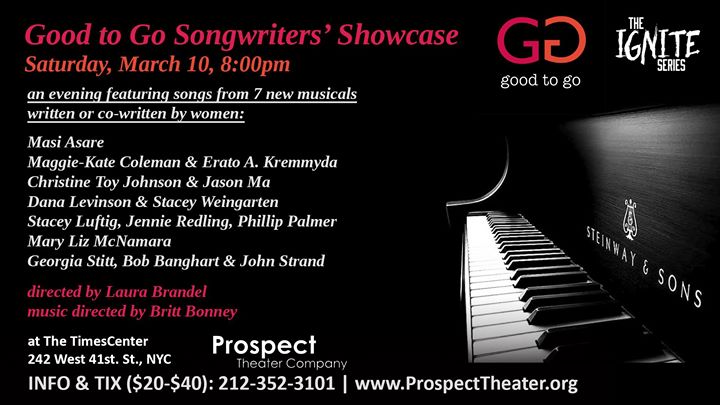 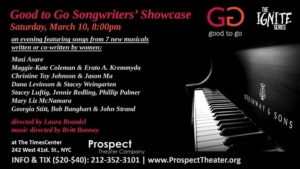 The evening will feature interviews with and new work by Masi Asare (The Family Resemblance); Maggie-Kate Coleman & Erato A. Kremmyda (Marie in Tomorrowland); Christine Toy Johnson (Barcelona);  Dana Levinson & Stacey Weingarten (5th Republic); Stacey Luftig & Jennie Redling (My Heart Is the Drum); Mary Liz McNamara (Body & Soul); and Georgia Stitt (Snow Child).  The Alaskan wilderness, the architecture of Barcelona, and a small village in Ghana are among the diverse worlds explored in the selected new musicals.  The complete list of collaborators and show descriptions can be found below.  For writer bios please visit www.GoodToGoFestival.org.

The concert will be directed by Laura Brandel with musical direction by Britt Bonney.  Stage management is by Katie Sammons and Kristina Vnook. Conceived by the Good to Go Festival’s Producing Artistic Director Judy Zocchi as a response to media reports noting a lack of female voices in the American theater, this year is the third annual concert.  “In 2018, we highlight shows that have been developed at the BMI Workshop, the National Alliance for Musical Theatre’s annual Festival of New Musicals, the American Music Theatre Project at Northwestern University, and many more outstanding programs and organizations,” said Zocchi.  “Prospect is thrilled to once again partner with The Good to Go Festival, after our previous concert collaborations,” said Reichel. “We are honored to continue bringing attention to new works by outstanding women writers.”

Single tickets are $20, $30 and $40, and may be obtained through online purchase at www.ProspectTheater.org / www.GoodToGoFestival.org, or by calling (212) 352-3101. Tickets may also be purchased at the door beginning one hour prior to curtain, if available.

The TimesCenter (www.TheTimesCenter.com) is located at 242 West 41st Street, between 7th and 8th Avenues, in the heart of NYC’s Times Square District. The venue features a 378-seat auditorium with state-of-the-art lighting, sound, and video capability, and a Steinway Concert Grand Piano.

Akosua and her mixed race family are expecting an ordinary Christmas back home in central Pennsylvania, but heavy winds, a corporate crisis, and a visitation from an African ancestor mean things do not go as planned. Even when your heritage is all over the map, you have to go back to your roots to find your own way.

In this musical collage, Marie Curie journeys through the remains of a Chernobyl-inspired theme park and encounters much of America’s troubled history with radioactivity.  Featuring a cast of women playing a kaleidoscope of Marie Curies, the piece explores the intersections between science and art, women and history.BARCELONA

When the death of her sister sends an American novelist into a downward spiral, a mysterious dream revives her with a jolt: an inexplicable desire to visit Barcelona. In a Gaudi’s city — shining with architecture, music, and romance — time is unlocked as the spirit of her sister leads her on an extraordinary journey of healing.

Set in 1958-59 during the fall of the French 4th Republic, an Algerian refugee and Pied Noir soldier find love amidst the political turmoil of the Algerian War for Independence and Charles de Gaulle’s return to power.  This epic romance is inspired by Victor Hugo’s Notre Dame de Paris.

A 16-year-old girl yearns to leave behind her poor village in Ghana and become a teacher.  When economic hardship forces her parents to pull her from school to work on the family farm, she rebels.  In her struggle to survive, she finds a way to bring together her love of her family and village with her desire to explore the world beyond them.BODY & SOUL
book, music & lyrics by Mary Liz McNamara

based on the documentary by Alice Elliott

Two amazing women, despite having significant disabilities, find meaning and independence by living together. Diana Braun, who has Down syndrome, cares for Kathy Conour, who has cerebral palsy.  Together, they cope with almost every problem in their daily life with humor and grace.

SNOW CHILD
Lyrics by Georgia Stitt
Book by John Strand
Music by Bob Banghart and Georgia Stitt
adapted from Eowyn Ivey’s novel, The Snow Child
Reeling from the loss of an unborn child, a couple struggles to rebuild their lives amidst the beautiful and violent landscape of the 1920 Alaskan wilderness.  The visit of a wild and mysterious girl promises to transform them all.
Related ItemsAmber GrayChristiane NollChristine Toy JohnsonDevin IlawGeorgia StittGood to Go FestivalKrystina AlabadoNewnew musicalswomen writers
Events

Suzanna BowlingMay 19, 2022
Read More
Scroll for more
Tap
A Letter to Harvey Milk Is a Long Time Coming, But Worth The Wait
Good for Otto or Only the Hamster Has it Good