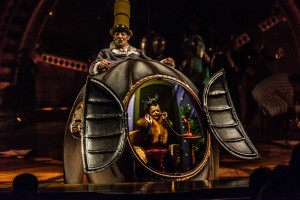 Cirque du Soleil’s has redeemed themselves with the magical, quizzical and wondrous Kurios—Cabinet of Curiosities. Writer-director Michel Laprise has brought this world of oddities to life with childlike glee. Kurios has the feeling of an off beat 1800’s valentine seen through the eyes of Tim Burton, with an infectious score by created by Raphaël Beau in collaboration with Guy Dubuc and Marc Lessard (known as Bob and Bill), fuses jazz with electro swing. The music alone is worth discovering.

This steampunk dream to life under the legendary big top, brings in characters from another dimension. H.G. Wells and Victorian era inventor are brought to light as sea and sky meet.

The story opens in the workshop of The Seeker (Eli Scoczylas), who is convinced a world lies hidden as his mechanical inventions spring to life when the clock strikes 11:11. It is the Mad Hatter no longer mad but a genius ahead of his time. 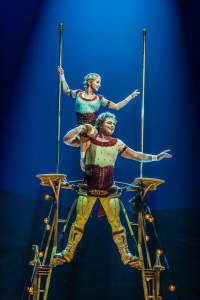 A trunk opens up revealing last century’s circus figures in a  frozen tableau, a tiny ballerina and an impressive strongman. As they wake they become a human trapeze act.

Next a (Anne Weissbecker) rode a flying bicycle upside down like a beautiful Miss. Glutch on route to Oz.

Facundo Gimenez called in an audience member to be his date as he hilariously interrupts the date with animal interventions. He returned later to do a Invisible Circus.

My favorite part was four sleek contortionists in body-hugging neon suits,  interlocking on a giant mechanical hand. They defied how a human body should twist and turn and personified grace. Like eels wrapping around each other they were truly rapturous.

The most amazing person was a tiny real woman who enters the show by climbing out of the costume of another artist (Mini Lili, 62-year-old Antania Satsura, is just over 3 feet tall and reportedly one of the 10 smallest people in the world).

Andrii Bondarenko dared to climb towering heights in a scene where a mirror image is like worlds colliding and waiting for us to notice.

James Eulises Gonzales, dressed as an aviator, keeps his balance as he rolled on eight cylinders. 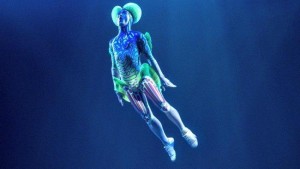 The ensemble of acrobats, with colorful little side fins, combines tumbling and trampoline to fly where fish have never gone. 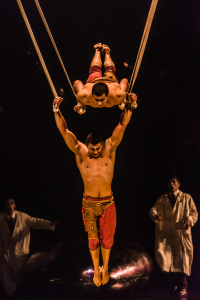 Beautifully in sycrinazatuion Roman and Vitali Tomanov, start off as conjoined twins, to separate shirtless in a high flying strap act.

The costume design by Philippe Guillotel seems to have been originated in dream with  an accordion-pleated man, a hoop-and-antennae lady with clickety-clack heels, a mentalist whose huge egg-shaped dome of a head glows with moving gears, men with fish fins, walking clouds and so much more. Set and props designer Stéphane Roy creates a worldthat looks like how Jules Verne might envision the year 1900. Kurios is visually stunning with exqusite lighting adding shadows and dimension and should not be missed.

The only bad part of this show is having to trek to Randall’s Island, which is over the river and into God knows where.
Kurios—Cabinet of Curiosities: Under The Grand Chapiteau at Randall’s Island, until November 27
Related ItemsAntania SatsuraCirque Du SoleilGuy DubucKurios—Cabinet of CuriositiesmagicalMarc LessardMichel LapriseNewRaphaël Beau
Dance