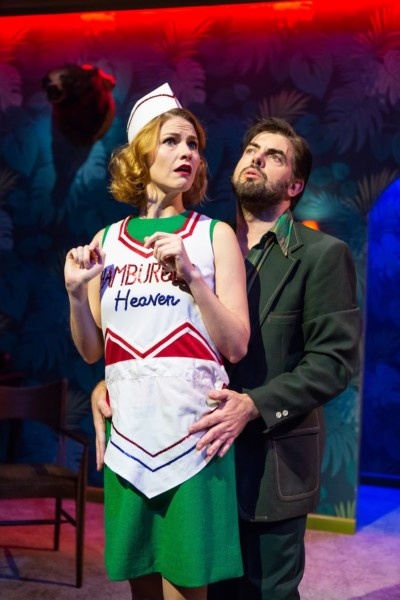 “This is a simple-minded play about men who enjoy killing, and those who don’t.” 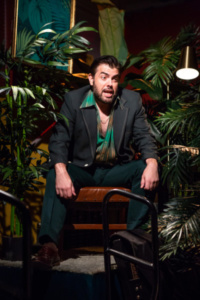 Happy Birthday, Wanda June opened tonight at The Duke on 42nd Street, produced by the Wheelhouse Theatre Company. I fell in love with this production in May, when it first played at the Gene Frankel Theatre. This transfer has helped the show evolve and in doing so broadened the way I first saw the show. Written by novelist and short story writer Kurt Vonnegut Jr. in the 70’s, this play is even more relevant today, especially after this transfer. 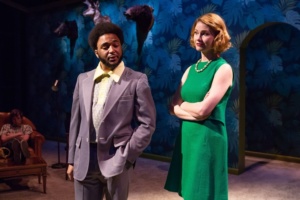 The entire cast delivers captivating performances, but Jason O’Connell as Harold Ryan is not to be missed. This man is so mesmerizing that you cannot take your eyes off him as he creates big-game hunter and war hero Harold Ryan. Kate MacCluggage has stepped up to the plate and matches Ryan tit for tat. Having returned home to America after being presumed dead for eight years, things become complicated for Harold and Penelope. During the war, he killed over 200 men and women, and countless more animals — for sport. He was in the Amazon Rainforest hunting for diamonds with Colonel Looseleaf Harper (Craig Wesley Divino), a slow-witted aviation hero, who had the unhappy task of dropping the atomic bomb on Nagasaki. Harold finds that his wife Penelope (Kate MacCluggage) has developed relationships with men unlike himself. A vacuum cleaner salesman called Shuttle (Kareem M. Lucas) and a hippie, Dr. Woodly (Matt Harrington), who later becomes Harold’s foe. Harold also finds that his son Paul (Finn Faulconer) has not grown up the way he would have liked. Ryan is the ultimate primate killing machine. 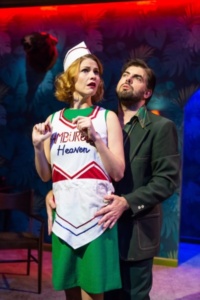 Set in 60’s America, Harold feels the country has become weak and all the heroes have been replaced by intolerable pacifists. Now Harold wants to right the wrongs, but finds he is in a changed world. 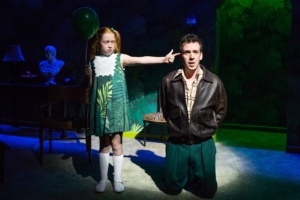 Wanda June (Charlotte Wise) is a young girl who died before she could celebrate her birthday. She was run over by an ice cream truck, but that’s ok, she likes Heaven. Her birthday cake was purchased by one of Penelope’s lovers for a celebration of Harold’s birthday in his absence. Wanda June and several other deceased connections to Harold speak to the audience from Heaven, where Jesus Christ, Adolf Hitler, Albert Einstein, and Judas Iscariot are happily playing shuffleboard. Among them is Harold’s ex-wife, Mildred – who drank herself to death because she could not stand Harold’s premature ejaculation – and Major Von Koningswald – The Beast of Yugoslavia; Harold Ryan’s most infamous victim. Vonnegut’s absurdist play on the human condition, seems to have been written for today’s society.

O’Connell’s performance is over-the-top, running the gambit from whisper to roar. His accents and alpha-primate physicality make this role fully fleshed out. He is menacing and vulnerable making us care and fear for him all in the same breath. He is the macho male whose intelligent makes him truly frightening. The biggest growth with the show is Kate MacCluggage performance as Penelope. Ms. MacCluggage  has grown and now with a bigger stage, her character is more fleshed out and less of a caricature. We now feel for her as well.  She is the perfect foil to O’Connell. Craig Wesley Divino, Finn Faulconer, Matt Harrington, Kareem Lucas and nine-year-old Charlotte Wise all fit the bill and add to this winning ensemble.

Director Jeff Wise makes intelligent choices and really allows Vonnegut’s words and ideas to shine through. Not always easy in an absurdist play. He has also broadened the cage (stage) that Harold and this cast inhabit and in doing so has fleshed out each role. Kudos to set designer Brittany Vasta, lighting designer Drew Florida and sound design by Mark Van Hare, who really put us right into the thick of things.

Wanda June is a take on the Homer story, but how can someone reconnect if they have never really known the person to begin with? Harold is a man out of touch with an evolving world.

Bravo Mr. O’Connell, Ms. MacCluggage, Mr. Wise, and the Wheelhouse Theatre Company. I look forward to seeing many more of your productions.

Genevieve Rafter KeddyAugust 6, 2022
Read More
Scroll for more
Tap
Go Inside The Fifth Annual  Broadway and Ballet Hero Awards
He Says: Broadway Serves Up The Ferryman – A Magnificent Shot of Irish Whiskey With a Splash of Intrigue.