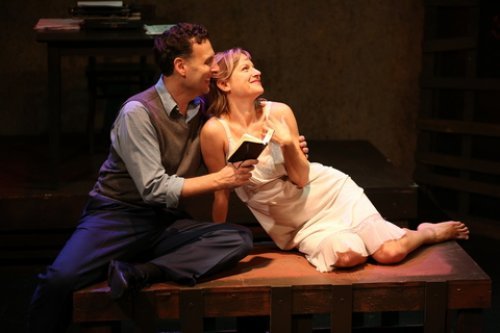 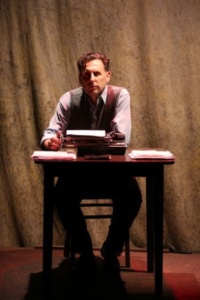 Kurt Vonnegut’s Mother Night is the fictional memoirs of Howard W. Campbell, Jr. (Gabriel Grilli), an American who moved to Germany in 1923 at the age of 11.

It’s 1961 and Howard W. Campbell, Jr. is writing his memoirs while awaiting trial for war crimes in an Israeli prison. Joseph Goebbels makes an appearance. A well-known playwright and radio broadcaster spouting Nazi propaganda, Campbell marries Helga, a leading German actress (Trish Lindstrom) whom he loves very much. When she is presumed dead, Campbell goes into a depression.

Just before W.W. II, he is recruited by a U.S. War Department official, Wirtanen (Andrea Gallo), to become a double agent, intertwining coded messages into his commentaries. President Franklin Roosevelt enjoys listening to him. Besides Campbell and the agent, only William J. Donovan (Dared Wright) knows of his service. To the world, he is a notorious Nazi to be hated; only white supremacists revere him. 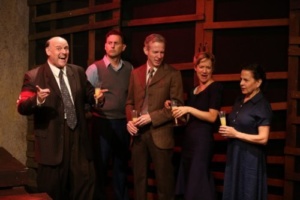 Fifteen years later, Campbell lives an anonymous life, sustained only by memories of his wife and an indifferent curiosity about his eventual fate. His only friend is George Kraft (David Sikula), a lonely neighbor who, through an extraordinary coincidence, happens to be a Soviet intelligence agent. When a woman, claiming to be Helga alive and well, professes her undying love, Campbell’s will to live returns, and remains even after he finds out that she is not Helga, but rather Resi. Thanks to a series of circumstances, Campbell is held in Israeli captivity where he converses with Holocaust survivor guards (Matthew Van Oss, Eric Rice). As he sits in custody, Campbell meets Adolf Eichmann who gives him advice on how to write an autobiography. Wirtanen writes to say she will testify to Campbell’s true loyalties in court and save him. Campbell, in the end, tells us that he will hang himself not for crimes against humanity, but rather for “crimes against himself”.

This production comes from the San Francisco-based The Custom Made Theatre Company. Directed and adapted by the company’s artistic director, Brian Katz, the show desperately needs to be trimmed down as it painfully drags on. There is too much exposition, though the narrated flashbacks work. Katz’s direction is clever for this small space and he uses it well.

The cast is highly uneven in their performances. As the lead, Gabriel Grilli is likable but does not have the temperament to carry off this play. He seems to sedate for the role. Ms. Lindstrom and Ms. Gallo succeed the best with their roles, but the characters are not fleshed out enough for us to care.

Mother Night asks the question what injustices we knowingly commit, can we live with? This ironically is playing out now.