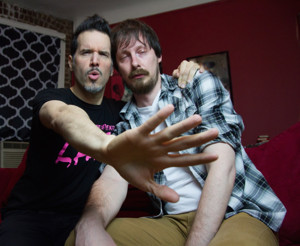 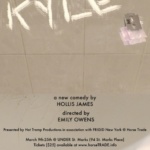 Hot Tramp Productions is “dedicated to blending the seriously funny and the hysterically serious,” and in teaming up with playwright Hollis James to produce Kyle, they deliver. The self-proclaimed “cocaine comedy” balances the everyday comedic moment with the poignant undertones required to take an audience on the journey of making and breaking a cocaine addiction.

The play chronicles the addiction of Jack (Nat Cassidy), a seemingly-bored- with-life writer who perks up when his girlfriend Crystal (Tricia Alexandro) reveals she has a phone number for a coke dealer, Frenchy (Christian Polanco). It’s clear she hasn’t used or spoken to the dealer in years, but one night of fun won’t hurt! Jack’s need to meet deadlines urges him to use more cocaine more often, creating a self-aware coked-out-writer-on-a-deadline cliché. As Jack uses, enter Kyle (Hollis James). Kyle is not just the personification of Jack’s cocaine habit, he is the personification of the habit-forming self that exists inside all of us. Kyle is lively and awake as long as Jack is capable of forming a habit – Kyle begins to inform Jack’s lies, his depression, his insecurities, his need for society, his moment-to-moment. So begins the spiral to rock bottom, which is a girlfriend-less, job-less, money-less place.

Jack’s editor and best friend Reggie (Christine Renee Miller) is the catalyst for change. Not only does she stop giving Jack work, she also provides him with a psychotherapist. Early on Jack brags about his “strong constitution,” a note which Cassidy takes seriously in portraying Jack’s struggle and desire to break Kyle. The second half of the play is a constant battle between “being good” and giving in to Kyle, highlighting the darker truths of addiction. In the end “being good” wins, but Kyle remains.

The slow pace of the production doesn’t do justice to the energy of the writing – something that can potentially be fixed as the show hits its stride. Emily Owens’ direction is simple and true to the slice-of-life feeling of James’ nonchalant dialogue. Hollis James and Nat Cassidy excel at playing the same person in unison of detailed gestures and matched energy. Tricia Alexandro’s portrayal of Crystal is bland through no fault of her own. The writing shows that Crystal is a strong, intelligent woman, which makes her decision to leave Jack obvious. However, the stakes for Crystal seem awfully low so it’s difficult to understand why she’s with Jack in the first place. The break up scene isn’t built well enough to believe her accusations of Jack, which weakens any sadness Jack expresses about her departure.

Despite its few faults,  Kyle delivers the truths of a serious problem through a comedic lens without dehumanizing or vilifying a person with a cocaine addiction. Hollis James exploits the humanity and danger of forming habits in a way that begs an individual to be aware of the “Kyle” inside themselves.

Suzanna BowlingJanuary 24, 2023
Read More
Scroll for more
Tap
Aisle Say On The Square: Power People
He Says: Come From Away: On Broadway, Via Newfoundland