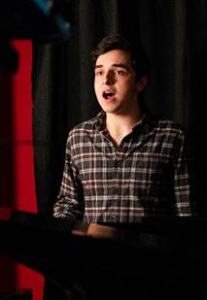 After hearing this song, you will so want to get tickets.

Before we can save the world, we have to save each other. From the Tony and Pulitzer Prize-winning composer of Next to Normal and the Tony Award-winning writer of Red comes a deeply human new musical about a fractured family, the mysterious stranger in apartment 4-B, and the unexpected hero who just might save the day.

Single tickets range from $79 – $99 and can be purchased by calling the Second Stage Box Office at 212-246-4422 or visiting the company’s website, www.2ST.com.  Subscriptions packages for this season begin at $195.  A limited number of $30 Under 30 tickets are available in advance to those ages 30 and under with proper identification.

$25 Student Rush tickets are available one hour prior to curtain based on availability. To purchase tickets or subscriptions, call the Second Stage Box Office at 212-246-4422 or visit 2ST.com.

In honor of Second Stage Theater’s 40th Anniversary Season, 40 seats for the February 3rd 7pm performance will be available for just $40 with code 40FOR40.