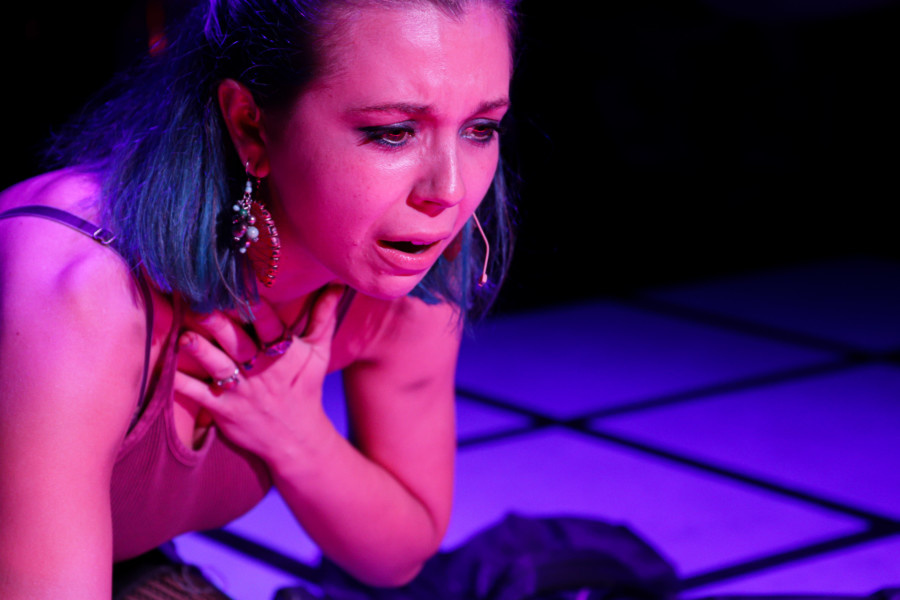 There is a new team writing book, music and lyrics for a new show called Contact High, that should be on everybody’s radar. Kyle Reid Hass and Jeremy Swanton are a talented duo that really know how to write, unfortunately they gave themselves the starring roles, while Kyle also directed and choreographed with Dana Norris and that is not where this pair should concentrate their energy. Like Pasek and Paul before them they need to set their priorities.

Helping these two is Emily Erickson who musically directed the show and the fabulous Ben Sheppard, who did the orchestrations that were  intoxicatingly well done.

Contact High tells the story of two high school seniors: Jean Simon (Gaberiella Marzetta), a drug dealer and recovering heroin addict and Haley Walter Keys (Mr. Hass), a misunderstood teen genius with a severe phobia of physical human contact. The production was based on a real life incident, along with the heroin epidemic among American high schoolers, particularly in the Midwest. The show also deals with the stigma surrounding mental health and the isolation a student might feel while struggling to overcome these afflictions. The added gun violence in schools is also addressed.

Also in the cast is Laura Thoresen a girl with a wonderful belt who befriends Haley. Mr. Swanton, stars and is gives a high pitched performance as the ex-boyfrind of Jean.

Ralphie, from Broadway’s A Christmas Story Johnny Rabe, has grown up proving that he has the “it factor.” He now goes to school at Stanford and is part of their singing group. Watch this video to see how much this young talent has grown up.

In 2018, Kyle and Jeremy presented songs from Contact High at Feinstein’s/54 Below and began work on a cast recording of the musical. The album, Contact High: A New Musical, was recorded in their apartment and released in March, 2019 to streaming services (Apple Music, Spotify, Google Play etc). In April of 2019, the musical was sponsored for a one-night-only production in Northbrook, Illinois by SunCloud Health, an outpatient treatment center specializing in recovery from substance abuse. After the performance, a talkback was conducted by the creators of the show and representatives from SunCloud in an effort to fight the stigmas surrounding drug addiction and mental health.

Mr. Hass and Mr. Swanton are skilled and their writing and music shows this. The should have workshopped this show before bringing it off -Broadway, because this show has merit and gives some powerful messages. I wish for this show, a chance to grow because it is relevant for our times.

Running, Where Politics are Outed
Out of Water: A Brazilian Pocket Musical Comes to NYC