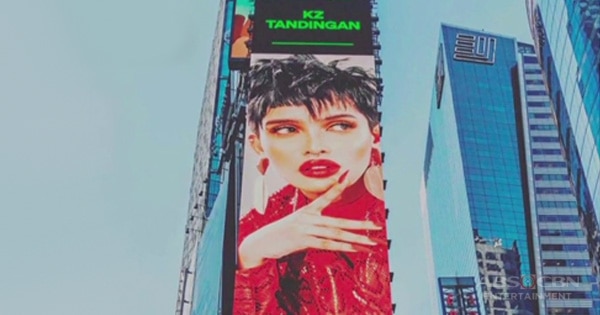 Filipino, International superstar KZ Tandingan has landed on a Times Square billboard. She appeared in a digital billboard for Spotify this week. KZ won recognition when she auditioned singing ‘Somewhere Over The Rainbow’ on X Factor Philippines! Hailed as Asia’s Soul Supreme. She rose to prominence following her win on the first season of The X Factor Philippines in 2012. Check out the whole video as song number 2 is spectacular.

That same year, she won Aliw Award for Best New Artist. She has released notable songs in the Philippines such as “Darating Din”, “Mahal Ko o Mahal Ako” and “Two Less Lonely People in the World”, which peaked at number 2 on the Philippine Hot 100 in 2017.

Tandingan is one of the members of the Filipino girl group DIVAS along with Yeng Constantino, Kyla, and Angeline Quinto.

She became known internationally when she joined Singer 2018, a popular singing competition aired on HBS.

Ilaiyaraaja is hailed as Isaignani (Mastro), is one of the most celebrated composers in the history of cinema. Recently, the composer teamed up with Spotify, and he has been promoting the same. He was recently featured in a three-minute-long ad film to promote his playlists on Spotify.