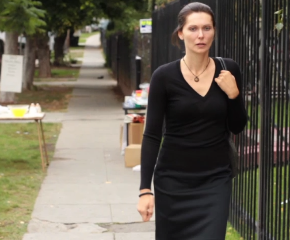 Los Angeles is difficult to navigate in general, but for an international model desperately seeking to secure her US citizenship, trusting the mob’s assistance is par for the course. This comedic feature film “LA Superheroes- Illegal in Hollywood” is loosely based on actual events and stars the brilliantly realistic writer/director/producer Yelena Popovic as model Helena, along with her sidekick Auto- a rad musician and pizza delivery guy hilariously played by Alexander Zisiades. Can they outsmart the system with super human persistence?

Winner of the “Audience Award for Best Feature” in the NY International Film Festival, (Los Angeles 2013 edition), this independent movie features a heavy hitting cast including many members of the esteemed Actors Studio.

TJ Castronovo, (you may remember him as Tommy the bartender in “Taxi”), not only co-produces, but is the quintessential wise guy who offers Helena “help” with a few strings attached, (if you know what I mean). Adding to Helena’s plight is

There will be a special Q&A with lead actors Yelena Popovic and Alexander Zisiades along with celebrity host Richard Skipper on Friday November 8 after the 7:30 PM showing.

Matilda or Miss Trunchbull?
A Gentleman’s Guide to Love and Murder is Murderously Delightful