Lackawanna Blues or The Tale of an Angel on Earth 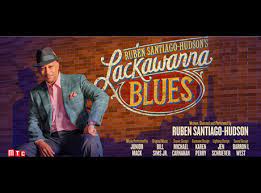 Lackawanna Blues or The Tale of an Angel on Earth

Ruben Santiago-Hudson Lackawanna Blues, is a one man autobiographical show about the woman who took him in and shaped his world. She is the angel we all wish inhabited humanity. Adding to this autobiographical tour of his childhood is the great blues guitarist Junior Mack. He plays the compositions of the late composer Bill Sims. When Santiago-Hudson joins Mack the rhythms of life speak volumes.

Santiago-Hudson breathes life into all those that moved, shaped and permeated his memory. It’s as if they all are lovingly haunting him, and performing Lackawanna Blues is his emancipation from his past. This is a masterclass in acting — or should I say inhabiting?

The show takes place in boarding house, restaurant, and nightclub outside Buffalo circa 1956 all run by Rachel Crosby. Santiago-Hudson plays over 20 different characters, all of whom were helped by Nanny in some way.

“Nannny, was like the government if it really worked.”

Miss Rachel Crosby, also known as Nanny, is the woman, we wish all of humanity would be like. She gives all she comes into contact with unconditional love, even when they do not deserve it. She is the damaged person’s patron saint. What is so fabulous about this show is that the violence, domestic and alcohol abuse are not brushed over, so that the racism that is dealt with rings blazingly wrong. Nanny is the safe haven that shaped Santiago-Hudson, who he has lovingly paid tribute to.

Under Jen Schriever’s lighting, we see Nanny come to life in the shadows. Ever present, ever there.

What makes a great play is the ways it can touch, reach and adapt. This one-man show premiered at the Public in 2001, was adapted by HBO in 2005, and has been performed all over the country by men, women and more than one person. In this production Santiago-Hudson directs, performs one of the most honest shows to hit Broadway.

Suzanna BowlingDecember 1, 2022
Read More
Scroll for more
Tap
Broadway’s Is This A Room and Dana H. Are Closing Early
Get Ready For TSX and Times Square’s First Permanent Outdoor Stage.