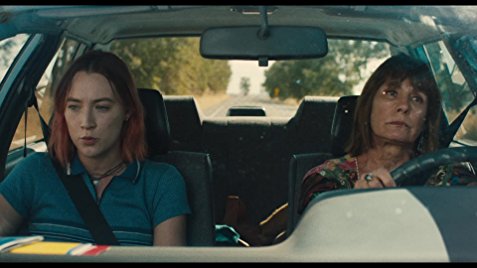 Lady Bird: A Movie Review; Love Letters to Mom and Sacramento, If You Can Believe It.

Lady Bird: A Movie Review; Love Letters to Mom and Sacramento, If You Can Believe It.

This lovely and engaging teen angst drama is basically numerous love letters all enmeshed into one teenager’s tale of awakening to the complexities of adulthood. “Lady Bird“, the directorial debut of Greta Gerwig (“Frances Ha“) is in part a coming of age story of an awkward rebellious senior in a Sacramento high school, wonderfully played by Saoirse Ronan (“Brooklyn“). This story is also part complicated family dynamic study exploring the combative love between a teenager and her stressed out angry mother, gloriously portrayed by the always amazing Laurie Metcalf (Broadway’s A Doll’s House Part 2, Misery). The beauty of this wonderful relationship portrayal is the shades of understanding and judgement evenly shared by both. Throw in the additional story of a touching gentle father, played by the magnificent Tracey Letts (Broadway’s Who’s Afraid of Virginia Woolf, playwright of Man from Nebraska), and a hilarious and engaging best friend/fellow high school outcast, played to perfection by Hello, Dolly!’s Beanie Feldstein, and what we have is one spectacularly layered and detailed directing debut by indie film actress darling, Greta Gerwig, with a heroine who wants to be called “Lady Bird”. 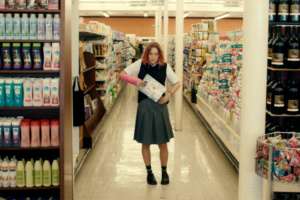 The first framed image is a quote about Sacramento that brings a chuckle to the audience of the New York Film Festival where I saw this glorious directorial debut gets its New York premiere. But the real kick in the pants comes just after. It’s a typical scenario gone wrong in a way we may have all fantasized about but never actually had the guts to do. It’s brilliant in its simplicity and shock value, and radiates the intricacies of the concise screenplay by Gerwig. It secures our understanding of this difficult and fierce relationship between mother and daughter while also deftly showcases their emotional connection. It’s not difficult to see the love but obviously for them, it’s not easy to display either. This is a battleground created out of care, with historical land mines all around.  A stunning moment happens when Lady Bird expresses a mother/daughter wish, only to have her mother’s history dismantle it quickly.  Some of the most touching scenes are centered around Metcalf’s display of compassion to others, such as the high school theatre director, who is in need of her nursing skills and understanding. But the most telling is a conversation between Lady Bird and her brother’s live-in girlfriend. In that moment, we see recognition in the daughter’s eyes, finally imagining the layers of difficult but loving attachment that resides in Metcalf’s well written and performed mother character. A shift occurs, but as with all things human, it takes a while to settle in and truly present itself for integration.

Then there is “Manchester by the Sea’s Lucas Hedges (MCC’s Yen) as Danny delivering a multi-layered sincere performance as the young man to first be given Lady Bird’s heart . It’s epically sweet and subtle with Ronan responding to him with such wonderful awkwardness that all hearts melt for her first true dive into romantic love. The scene they experience out back of the coffee shop is weep-worthy, and ever so touching. All grievances are forgiven in that moment for the both of them, and we join them in their holding of one another. 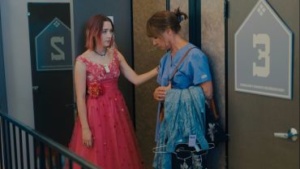 The other love, maybe the one that surprises while also being the one we all can connect with somehow, is the love letter to home and Sacramento. We all have a part of our psyche that both dislikes or looks down upon (I was going to say hates, and maybe that’s true for some but definitely not all) the hometown left behind. Part of our heart always resides somewhere in the familiar roads and spaces that make up our childhood and teenage years, and in Lady Bird, those streets, beautifully shot by cinematographer, Sam Levy (“Mistress America“) sits in Sacramento. Village Green Ave, that generic subdivision called Westmount, in the city of London, Canada is where I grew up and my parents still live. My home is planted there, in that small city that I couldn’t wait to leave. I dreamed of the other more exciting London, the one in the UK, while also dreaming of living one day in New York City. I don’t even know where that first spark of desire came from. Maybe television or a movie? I’m not sure, but like Lady Bird, the desire is tantamount to all things, including our parents’ desire for us to remain close, or to love the home town they chose to raise us in. It is most definitely above and beyond all financial restrictions that living elsewhere for university begets, like NYU for Lady Bird and Toronto for me. It is also dismissing of all the fearful anxiety, both our own and our family, that separation creates. We see the big city beyond our little town as intoxicating and thrilling, like spreading our wings wider than we ever imagined, and becoming the adult we can’t even quite comprehend. Sacramento to Lady Bird, is what London is to me, and only later in life can we look back with love and affection to the city and the family we so hurriedly left behind. This film helps us look back, with love and regret, with a guilty glance to how we behaved towards others in the years of our youth, with an eye towards forgiveness and love. Greta, you did great! 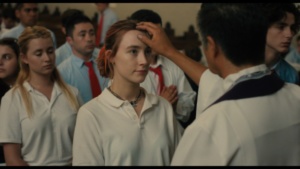 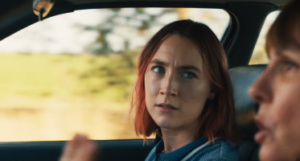