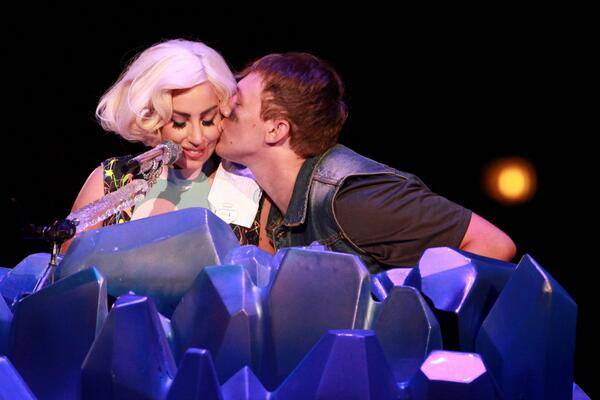 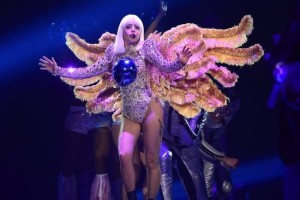 This date was a long time overdue. During her prior “Born this Way” tour, Lady Gaga tore one of her hip muscles and had to scrap the remainder of her shows, sadly on the very day she was to headline the Windy City’s United Center. Thousands of little monsters, myself included, were distraught when Mother Monster proved herself a little too human that day. Fast forward a year and a half and Lady Gaga made good on her pledge to triumphantly return to the United Center stage. Her fans came dressed to play in various wigs, vinyl, feathers, caution tape, heels, and glitter. All eager to celebrate their heroine of hype, Grammy Award-winning Queen of the Pop charts, the Damsel of Drama, Lady Gaga. 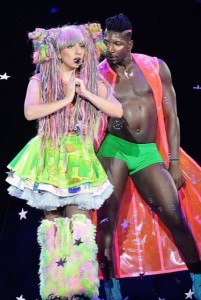 On a stage that seemingly fused Superman’s Fortress of Solitude, with two model catwalks and Strawberry Shortcakes’ fluorescent hot pink lighting, this arena was about to explode into a celebration of all things pop! “Artpop” that is. 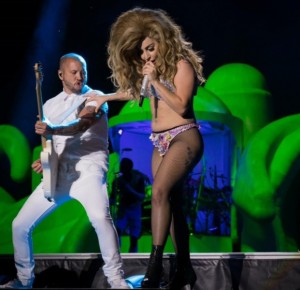 Lady Gaga began her nearly 95-minute set, initially clad with large golden angel wings, and a matching beaded bodysuit. A large blue dome sewn across the torso (you were expecting jeans and a tee shirt?) supported by a powerful, five-piece band and a dozen back up dancers. Opening with “Artpop,” “G.U.Y.” and “Donatella” (Gaga is the current face of Versace, after all) this “Art Rave” show was a celebration of her latest material. A gala marking the return of this powerhouse performance artist. Not only is she back, but more resilient than ever. Her second quick costume change revealed just a shell bikini top, think like Ariel, the Little Mermaid’s naughty, trash talking big sis, and a beaded thong over fishnet stockings, and a wig that stood over a foot tall off of her scalp. This is a woman who has extraordinary posterior pride! Screaming to the eager audience “My Artpop Could Be Anything!” she proved just that with a dramatic rendition of “Venus” and a whimsical take on her song “Manicure.” Gaga was having as much fun on stage as the audience was having emphatically watching her. 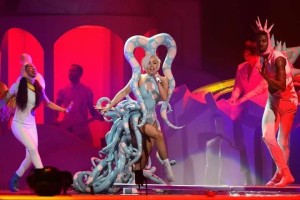 Round three of costume switches brought us the Gaga Classics: “Just Dance,” “Poker Face” and “Paparazzi.” Garbed in bright, sky blue & white polka dot bodysuit, with a head piece and train of tentacles, Gaga looked like the bride of Sigmund the Sea Monster, but with the nonstop energy and euphoria of Electra Woman & Dynagirl combined. The Lady then got down and dirty with a PG-13 rendition of “Do What U Want” while suspended on a chair about 20 feet above the stage. Ah….. just a simple girl with a dream. 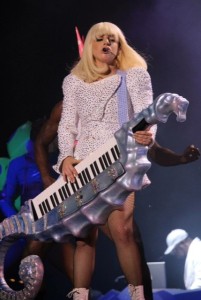 The emotional highlight of the night came next as Mother Monster invited a teenaged member of the audience to join her on stage to perform a scaled down, ballad version of the popular gay anthem “Born This Way.” To those who look at Lady Gaga as a disposable pop tart, flash in the pan, this woman continues to prove she has an amazing and commanding voice as well as solid musicality. Seated at a keyboard with a passionate zeal in her voice, she turned to the fan next to her on the piano bench, saying, “When I look at you I see myself.” A 16,000 nearly sold-out audience member sing-a-long ensued. 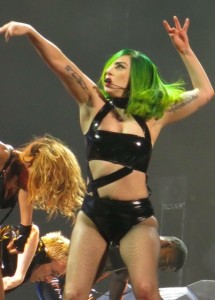 Turning the party beat back up, and now clad in an all black bodysuit with a bright green wig, Gaga owned her hits “The Edge of Glory/Judas,” “Aura,” “Sexxx Dreams” and “Alejandro” with remarkable vocals and expressive choreography. To show this chanteuse can be as relatable and authentic as she can be, Gaga stripped, quite literally, center stage, with the help of two handlers and some strategically placed, bright green nipple cover tape. Tearing off her own wig and replacing it with day-glow dread locks, Gaga emerged next as a bright Anime character, singing the praises of “making your dreams come true!” To go along with this new look, we were treated to a jam-packed, all out version of “Bad Romance.” Gaga did take a moment to highlight the fact one of her numerous talented back up dancers were originally from Chicago, then the team broke out into the unstoppably infectious hit “Applause.” Rather than making this just a melody about her global star power, she bolstered the audience by suggesting we all “Cheer for yourself, cheer for each other.” And that we did. 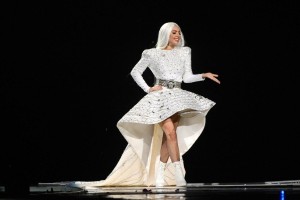 After an almost 10 minute, non-stop, standing ovation, Lady Gaga emerged in her final gown, straight out of Judy Jetson’s closet. All white, with a long Morticia Addams blonde wig, Gaga worked her stage’s elaborate runway, like a poised, punk rock, beauty queen. When she reached the end of the stage’s catwalk, she sat alone at her piano and began the show’s final song, “Gypsy.” The song started softly and passionately, with the voice of a gospel choir soloist, then ended with a raucous fury, her band and she in harmonious unison, their electronic dance music rocking to the rafters of the United Center. 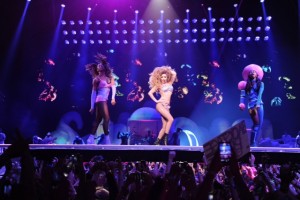 It took a while for her get back to Chicago, but when she did, Lady Gaga delivered, big time.