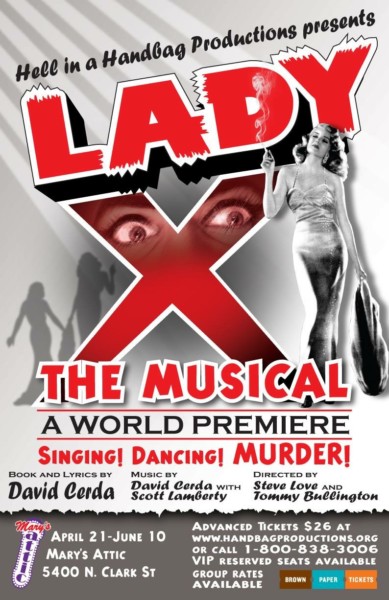 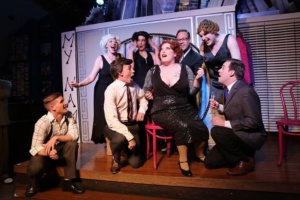 With the success of Feud from the FX Network, with its sumptuous costuming and strikingly accurate portrayals of screen legends Bette Davis and Joan Crawford by Susan Sarandon and Jessica Lange, Hell in a Handbag’s latest, Lady X The Musical, filled the perfectly timed void left by that series’ inaugural finale. Their latest world premiere musical, clearly tipping its hat to the 1937 film, Marked Woman, starring Bette Davis and Humphrey Bogart, is a noir inspired delight. Mixing gender-bending camp, a long time staple of Hell’s casting, with glitter dipped imprudent dames and not-so-savvy stool pigeon mob moles, this mystery who-done-it is light-hearted fare, just in time for the rising temperatures of the Windy City’s late spring. Originally staged in 2010 as a play, Lady X has now been reconfigured into a charismatic musical with book and lyrics by David Cerda and music by David Cerda and Scott Lamberty. Also pulling double duty here, co-directors Steve Love and Tommy Bullington. Love also clocks in as the show’s choreographer as well. Mary’s Attic stage may redefine intimate, I am truly stunned a cast this big doesn’t constantly bump into one another mid-scene, mid-song, or mid-fan kick, but I will be honest, this was one of my favorite productions from this scrappy, vampy, and amusingly trampy troupe. 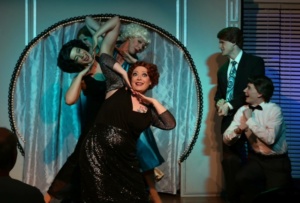 The story was paper thin, but that’s part of Lady X’s endearing charms. Centered around a nightclub where the staff provided “benefits” far beyond just coat check and cigarettes, this cast of no-no noir wannabe’s was Lady X’s strongest asset. Bawdy red-head Gabby (Caitlin Jackson) Martin a coke fiend with a heart of gold and the voice to match. This lewd angel’s rendition of “Flim Flam Floozy” was an early on show stopper. This actress has a voice as vast as a football field and she was often allowed to, pardon the sports metaphor, spike the ball. Joining her on the chorus line of questionable cuties, Estelle (Ed Jones) one of the most senior members of the world’s oldest profession, vapid Emmy-Lou (Elizabeth Lesinski) and ditsy Ruby (Sydney Genco) who harbored a paternity secret of her own I do not dare spill here. Mary (Christea Parent) Dwight, had the largest role, the ever romantic “clip-joint” hostess who worked overtime to keep her baby sister, Betty (Steve Love) on the, ahem, straight and narrow path. Quickly mixing champagne and sequins with poor judgement proved too much for Betty who traded in her schoolgirl uniform for more figure flattering and form-fitting formalwear and heels. Speaking of stilettos, no heels were higher than those of Scarlett Fontanelli (David Cerda) the new owner of the club, also anxious to control the city’s underground criminal syndicate. Not if Assistant District Attorney, Frank Graham (Laura Coleman) can get one of the girls to testify against Fontanelli first. 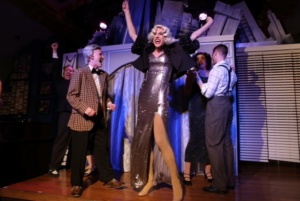 Paying homage to classic, black and white, film-noir movies of yesteryear, this nightclub with benefits mafia tale was as silly as it was entertaining. Told in splashy, bright and unforgiving color, all involved were allowed individual moments to shine. Think the classic vignettes of the old Carol Burnett variety show, but on heavy does of acid! Kate Seltzer Kamphausen’s costuming on-a-budget never compromised character or high levels of camp. Each statement necklace successfully screamed “Look At Me!” The same could be said for Keith Ryan’s gravity defying wig design. The many contestants on Rupaul’s Drag Race should take note. Roger Wykes effective set design worked as far as it could. Sydney Genco’s makeup strategy was Hollywood period perfect. A fury of fluttering false eyelashes with ruby red lips one could see from outer space sold the piece long before any character actually spoke. If you’re gonna bump it, bump it with a  trumpet, indeed! Mama Rose would be so proud, Ms. Genco. JD Caudill’s music direction kept the pace flowing as this naughty array of divas were often busy belting in-between mob hits and murder. With lyrics from House on the Hill  that included “turn the knob and come in” it was clear tongues would be firmly planted in cheeks all night long. Lady X The Musical is an adults only, must-see melodramatic spoof. Grab a drink from the bar and settle in for some high-camp, high-energy and highly entertaining fun. 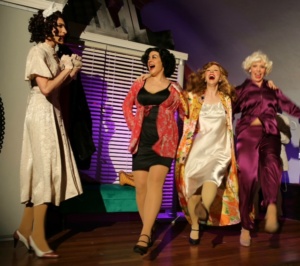 Hell in a Handbag Productions presents Lady X The Musical is now playing at Mary’s Attic through June 10, 2017 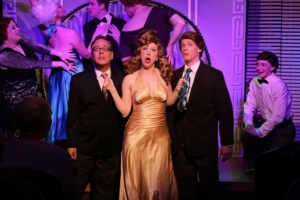 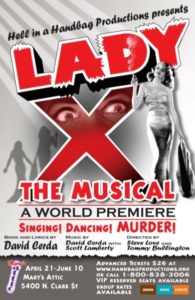