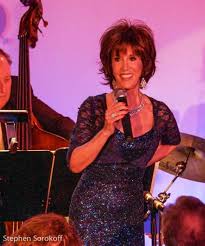 A friend of The Lambs, Foster Hirsch, a film historian, author of 16 books on film, and professor of film at Brooklyn College, will lead the conversation. Q&A will be held to the end.

Deana Martin is an influential American singer, actor and performer and the very proud daughter of iconic entertainer, Dean Martin. Deana achieved success early in her career in films, theatre and television, then quickly added to her repertoire — recording artist, best-selling author, nationally syndicated radio host, licensed pilot, and entrepreneur. As an internationally acclaimed entertainer, hit recording artist and an in-demand performer, playing to sold-out audiences worldwide, Deana Martin has become an instantly recognizable voice and figure in the pantheon of The Great American Songbook.

Deana 2006 debut CD release, Memories Are Made Of This, stayed in the top ten for 40 consecutive weeks.  In 2009 another hit CD, Volare, was released; it debuted on the Billboard charts at #7 and the Jazz chart at #22.  White Christmas was another chart buster, released in 2011; it has become a seasonal evergreen, hitting the top ten each Christmas since it’s release. Deana’s 2013 critically acclaimed CD, Destination Moon, is currently playing on over 1200 radio stations around the U.S Deana’s 2016 release, Swing Street, has broken sales records and garnered airplay on top Jazz, Standards and Country radio stations, emphasizing her prominent status as hit recording artist.A celebrated author, Deana Martin found herself on the New York Times coveted Best Seller list with her 2004 memoir, Memories Are Made of This: Dean Martin Through His Daughters Eyes.  In it, Deana delights in sharing wonderful, never-before-told stories about her father and his Pallies. To her they were known as, Uncle Frank (Sinatra) and Uncle Sammy (Davis, Jr) – to the world, they were known as the Rat Pack. In 2015 Deana’s book returned as a Best Seller on the Wall Street Journal’s list of Top Ten Nonfiction E-books. The book will soon be made into a movie, directed by actor Joe Mantegna, with screenplay written by actor/writer/television host Bonnie Hunt, and starring Jennifer Love Hewitt.
For more information on Deana Martin, her career and upcoming concert appearances, please visit her website at www.DeanaMartin.com.

Suzanna BowlingJanuary 22, 2022
Read More
Scroll for more
Tap
What To Watch July 5th To Take Away The Blues
The Glorious Corner