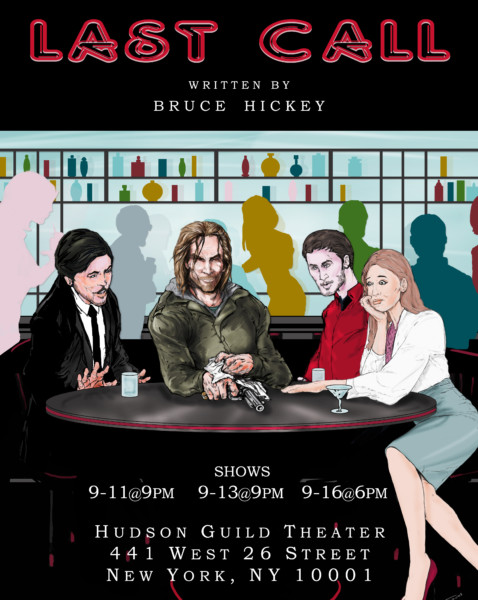 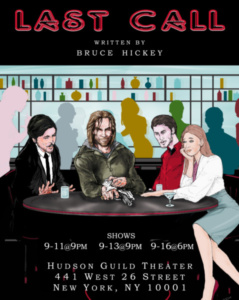 Bruce Hickey’s slick, new play, Last Call, at The Hudson Guild Theater Summerfest is one wild ride. Set in a bar in 2007, Last Call deals with the past and present, as three so-called-friends, a dot.com bigwig, Burns (Mike McNulty), and a man who is known only to one (or is it two) become entrapped in a mind-f**k game of dog-eat-dog. Will they survive? Will they stay in the game? Or is there some morality left that keeps their humanity intact? This rollercoaster of a ride leaves you guessing until the very end.

First at the bar is Marty (Grant Schumacher), a slick commercial director who is hiding a dark past which has come to accost him at the bar. Seems Marty spent some time in jail, and Quinn (Gerald Bunsen) saved his life. Now Marty owes him, and Quinn needs cash ASAP. Marty tells him to meet him at last call, but Marty stays for awhile just to glimpse Sherri (Francesca Anderson), a careerist corporate lawyer. Sherri uses her looks to get ahead. Once a lover of Marty, she now dates Phil (Bryon Clohessy), the third of the trio. Phil is a good guy, as well as the neurotic head of finance. The three have met to put together a dot.com deal that can send their careers soaring, however, the unresolved issues and sexual chemistry between them leads to mind games that threatened to destroy the deal. When Quinn shows back up, the Vietnam vet and ex-con holds them hostage at gunpoint. Quinn wants the three to confess the worst thing they’ve ever done or die. In the end, business and personal lines are crossed. Who is pulling the strings, and why, becomes a game well played. In the end, nobody trusts each other and loyalty is out the window.

The cast does well with this material, especially Mr. Schumacher and Mr. Bunsen. Holly Payne—Strange keeps the show at a pace, leaving us to guess the next turn of events.

Mr. Hickey’s work is interesting and the audience was on the edge of their seats. By the end, the game is so well played, that like an Albee play the audience was silent and not moving, even after the lights went up. Like most shows in festivals, the beginning and the ending needs to be honed and more defined. Also, I would go even further on the character studies, making them even more despicable and fleshed out.

All in all, Last Call is some really fine writing with a premise that I haven’t seen before, and that is saying a lot.

Suzanna BowlingJanuary 16, 2021
Read More
Scroll for more
Tap
A Title You Can’t Print and a Story Line that Makes No Sense… F**king A
Viva Broadway! Brought Out Lin Manuel Miranda, His Dad and More