Last Out Elegy of a Green Beret Honors Our Veterans 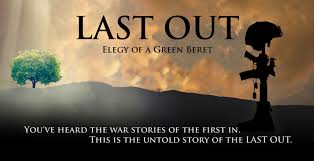 Last Out Elegy of a Green Beret Honors Our Veterans

Last Out Elegy of a Green Beret, is written by and staring Ret. Lt Col Scott Mann. The play isn’t an auto-biography, but a universal story of those who served in combat. Last Out, is based on true stories of the warriors Scott served with, many of whom are no longer with us. Pulled from a war that was mostly fought in the shadows, this is a story that’s never been told, in a voice that’s never been heard.

The play is touring around the country and made a two day stop in New York City.  The incredible cast is made up of army veterans.

Writer/actor Scott Mann spent 23 years in the United States Army. 18 of that was as a green beret, were he specialized in unconventional, high-impact  missions all over the world. He began his acting journey with this play. Scott currently studies theatrical writing and acting under the coaching of Jason Cannon of Florida Studio Theater and Karl Bury at the Karl Bury studio.  Together with his wife, Monty Mann Scott, he founded the 501-c3 non-profit, the Heroes Journey, to help veterans tell their stories in transit.

The incredible cast also includes Len Bruce, a 22 year veteran of the U.S Army and former Green Beret. Bryan Bachman, served nearly eight years in the U.S. Army and spent the majority of his service stationed at the renowned Fort Bragg, assigned to the 82nd airborne  division, as an airborne infantryman. Director/actress Amy Livingston is from a long line of servicemen who has inspired her with their stories.

Opening night was attended by Tom Brokaw and Tony Lo Bianco. Tom Brokaw made an introductory speech before the show and Scott Mann made a moving curtain call speech.

Suzanna BowlingMay 24, 2022
Read More
Scroll for more
Tap
Gary Busey And The Cast of Only Human Meet the Press
In Conversation With Austin Pendleton Part 1 and 2