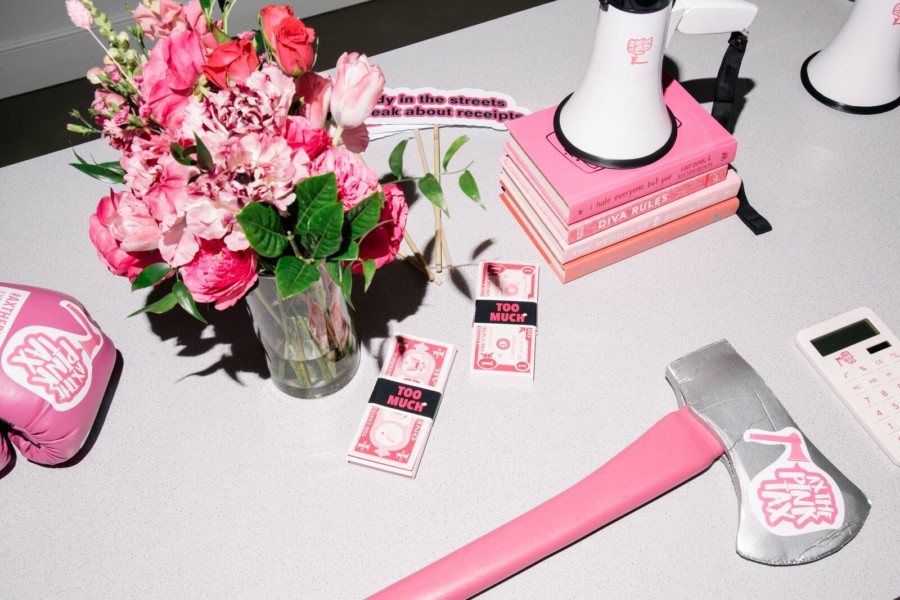 This week at Williamsburg hotspot hotel, The Hoxton, dozens of women gathered to laugh and make a cutting statement with #AxThePinkTax.

The Pink Tax has been making a stink around the world and the phenomenal European Wax Center is taking a fighting stance in making it a thing of history. The beauty the center has been creating for years is timeless, but the Pink Tax is destined to be a thing of the past when it comes to the campaign. Efforts were celebrated at the grand soiree that was co-hosted by Man Repeller.

Ladies and a few amazingly supportive men came out for giggles and cocktails at the Pink Tax Comedy Show, which highlighted funny stand-up by Tribble, Molly Austin and Fareeha Khan.

The curated event took a swing at the tax that makes it so the average female is charged an extra $1,351 every year as a consumer on such products as razors and face creams.

Best news is the show will soon be hitting up other major cities around the country to promote awareness and change.

European Wax Center is a brand that empowers confident women every day. EWC first launched its #AxThePinkTax campaign in 2018 to raise awareness surrounding the often-overlooked Pink Tax: the extra amount of money women are charged for everyday products and services throughout their lives. The “tax” is present everywhere from baby bottles and personal care products to clothes, canes, and more. As the Clio award-winning campaign enters its second year this April, EWC will take the campaign to the next level by not only continuing to raise awareness through education but also by providing people with tools to take action and ignite a movement. The Pink Tax is absurd, and EWC is taking action.

“As multiple studies have confirmed, The Pink Tax is real. It affects not only the millions of women who come to our centers, those who work at EWC locations, but all women, everywhere,” says Sherry Baker, President of Marketing and Product Development for European Wax Center. “Due to The Pink Tax, the average woman is charged an extra $1,351 each year for basic goods and services, which is money women will never get a say in how to spend and money that will never get invested, donated, or used to fund a passion project or business. We know that women know their worth, and we are going to help them claim it.”

Here is to taking the ax to tax.

ElizaBeth TaylorSeptember 14, 2021
Read More
Scroll for more
Tap
St. Peter’s Foot: Wishing for More
I’m Gonna Make You Love Me Ain’t Too Proud: The Life and Times of The Temptations