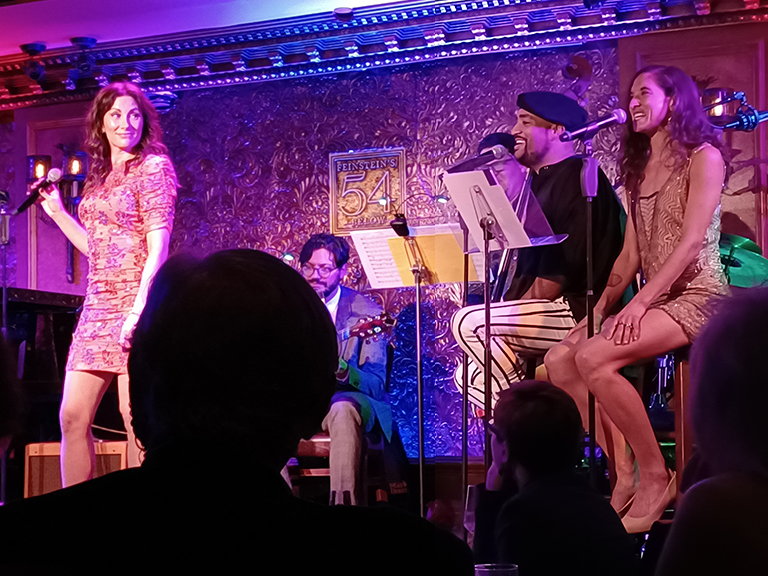 Feinsteins/54 Below is already the crown jewel of cabaret spaces in New York.  So it isn’t surprising that they would create the Diamond Series in which only the finest of Broadway singing talents would be allowed to sparkle. Where else for $300 can you get to see your favorite Broadway star, up close and personal, together with what is promoted as 3 course, 5 star meal?

Whether or not the food lives up to the ballyhoo is debatable.  The quartet of hor d’oeuvres were tasty, yes. But had they been any smaller they would have been microscopic. For an appetizer, I had the surprisingly meaty lobster bisque which was, indeed, the best lobster bisque I have ever had.  But that was followed by a choice of only either chicken breast, or a wild hen with mushroom, as the entrée. It made me think of the old Peter Cook and Dudley Moore sketch, “The Frog and Peche,” a fancy restaurant where the only two choices on the menu were Frog a la Peche — a frog with a peach stuffed in its mouth — and Peche a la Frog — a large peach filled with swimming tadpoles. For that money, I had expected to see filet mignon or some seafood (the amazing bisque notwithstanding) on the menu.  Besides that, the chicken was rather dry and a tad overcooked. I think they could do better in the future.

But as for the entertainment… how can you beat Laura Benanti?  This magnificent woman does it all, and does it all beautifully.  She is a fine actress, garnering acclaim for recent performances in the movie “Worth,” and TV roles on such shows as  “Supergirl” and “Younger”.  I still remember her as the Mama Bunny in “The  Playboy Club” from 2011.  But she is also as goofy as Lucille Ball, with a wickedly sly sense of humor.  Could we have survived four years of “The Donald” without her frequent appearances on “Late Night with Stephen Colbert” as an increasingly manic Melania Trump?  She is as endearing as a warm puppy, endowed with a voice as shimmering as the finest faceted jewel, and as if that’s not enough, she’s flat out gorgeous. So the Feinsteins/54 Below audience, after polishing off the poulets, ate her up as well.

Ms. Benanti’s eclectic set was mostly songs from her self-titled album.  She showed off her comedic side early by sending up Burt Bacharach’s “Wives and Lovers,” illustrating how much times have changed, with knowing nods to the old image of the devoted wife doing the housework, who needs to be ready for sex when hubby comes home, too.  But then she found all the sad beauty in “The Party’s Over” from   “Bells are Ringing” by Stein, Comden and Green, and sailed wistfully through “What Are You Doing the Rest of Your Life” by Michele Legrand and the Bergmans.

She regaled us with stories of her New Jersey roots, and wonderful personal anecdotes.  Family is clearly important to thrice-wed Ms. Benanti.  Even a bachelor like me had to smile when she told how her three year old daughter became good friends with legendary actress Rosemary Harris during  “My Fair Lady,” and would dutifully lead her back to her dressing room after they ate together so Ms. Harris could “take her nap”.

Ms. Benanti shared her joy that she has been lucky to perform several of her dream musical theater roles, not even counting her Tony winning performance in “Gypsy.”  She recalled stepping into “My Fair Lady” to play Eliza Doolittle after Lauren Ambrose departed, and sang us a thrilling rendition of “I Could Have Danced All Night.”  She recounted making her Broadway debut at age 17 while still in high school as Liesl in “The Sound of Music,” and understudying the finest Broadway soprano of her generation, Rebecca Leuker, who was sadly lost to us last year from ALS disease.  She made us weep with her warm memories of Ms. Leuker’s generosity as a performer…how Ms. Leuker always called the part of Maria “our role”, and how the most important lesson she learned from Ms. Leuker was to show kindness to everyone. When Ms. Benanti then sang “The Sound of Music,” the music meant that much more.

Of course, no concert of hers could be complete without “Vanilla Ice Cream” from Bock and Harnick’s “She Loves Me,” the revival of which in which she starred a few years ago let Ms. Benanti stand as tall vocally  as the revered Barbara Cook, who created the role.

Her back up singers, Michael Nasse and Miranda Ferris Jones, were two accomplished performers in their own right. Ms. Jone’s achingly soulful rendition of Anthony Newley’s “Feeling Good” from “Roar of the Greasepaint….”, nuanced and powerful, was a particular highlight of the evening.

The only disappointment to me was her unconvincing and hammy rendition of “The Boy From…”, a comedic parody of  “The Boy from Ipanema” by Mary Rogers and Stephen Sondheim, in which the singer gradually figures out that she has fallen for a handsome but gay Castillian.  It was a lot less funny than it should have been, despite Ms. Benanti’s ample mugging.  She never embodied the naiveté of the singer, requisite for the joke, and she never allowed her always perfect voice to break down along with the increasing frustration of her character, which is what really makes the song fun to watch.

She did let her hair down a bit more vocally with her performances of “Sucker” by the Jonas Brothers and “Fifty Ways to Leave Your Lover” by Paul Simon.   But I’d love to see her take on a song like “She Used to Be Mine” from “Waitress” in her next cabaret show,  which would require that she convey emotional depth without all that vocal polish. Diamonds can shine brightly, and yet sometimes seem cold as well.