Laura Benanti Dishes on This Political Climate and More

Laura Benanti Dishes on This Political Climate and More

Did you know Laura Benanti has an auto immune disease, which stops her from shaking hands after a show? Learn this and more as host Patrick Hinds is in conversation with Laura Benanti at at BroadwayCon. 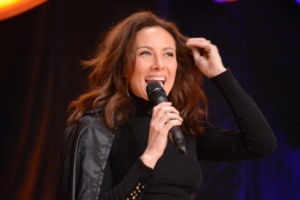 Ms. Benanti was most recently seen on Broadway starring in She Loves Me at Studio 54. She is a Tony-winning actress, earning the award for Outstanding Featured Actress in a Musical as well as Drama Desk and Outer Critics Circle Awards for Gypsy. Broadway: Swing! (Tony nomination); Into the Woods (Drama Desk, Outer Critics and Tony nominations); Women on the Verge (Drama Desk, Outer Critics Circle Awards and Tony nomination); In the Next Room, or the vibrator play; and The Sound of Musicopposite Richard Chamberlain. TV: “Supergirl,” “The Sound of Music Live!,” “Nashville,” “Go On,” “Nurse Jackie,” “Law & Order: SVU,” “Royal Pains,” “Eli Stone,” “The Big C” and “Elementary.” LauraBenanti.com @laurabenanti