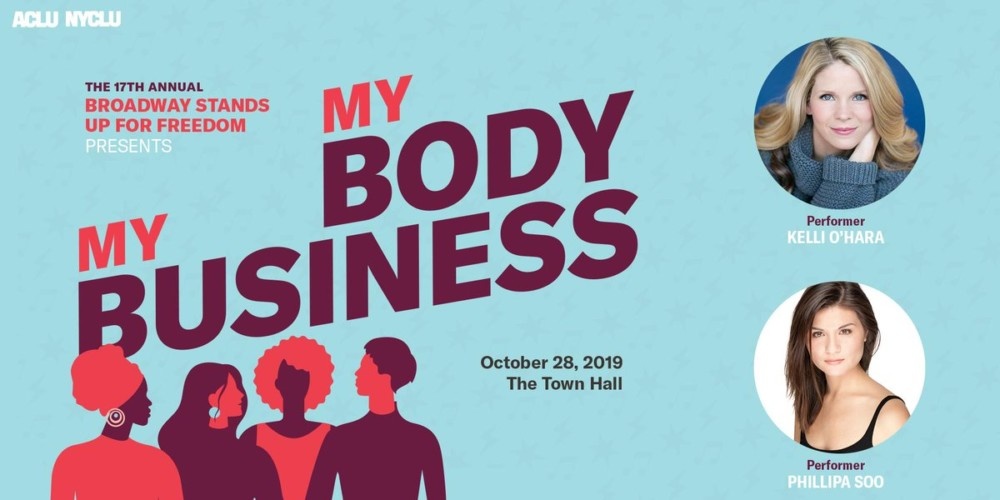 Tony Award-winning actress Laura Benanti (My Fair Lady) has been announced to host and perform at the 17th annual Broadway Stands Up For Freedom concert on Monday, October 28 at 7:30 p.m. at The Town Hall in New York City (123 W. 43 St.) Also joining the previously announced line-up of stars will be performers Alysha Umphress (On The Town), Kim Blanck (Octet) and Mili Diaz (Wicked).

“We have never needed the NYCLU more than in this particular moment in time,” says Benanti. “My dear friend Celia Keenan-Bolger is a tireless activist who deserves all the accolades and praise (although she requires none of it). I am honored to be a part of this event, and hope that everyone who can will join us for what is sure to be a memorable evening.”

Rachel Chavkin – the Tony Award-winning director of the 2019 Best Musical Tony winner Hadestown – directs this year’s event with Annie Tippe as the associate director. The concert will celebrate the power and courage of people fighting for reproductive rights and bodily integrity of women and trans people. The evening will feature performances and appearances by Broadway performers and inspiring activists who stand up for freedom and civil liberties for all.

“Now, more than ever, we must come together as a community to fight for the rights of women and trans people, especially those most marginalized because of their race, class, disability, or immigration status,” said Donna Lieberman, executive director of the NYCLU. “Art has always been a powerful cornerstone of social justice movements, and this year’s concert will continue the tradition of using music to bring people together, celebrate our victories, and inspire us for the fights ahead.”

Ms. Keenan-Bolger will be the first recipient of the Michael Friedman Freedom Award. As a founding member of the Broadway Stands Up For Freedom planning committee, she has been one of the most active contributors over the years. The NYCLU and ACLU are honoring Celia for living a life and pursuing a career dedicated to social justice. She uses her talent and voice to educate, create dialogue, and catalyze social change both on stage and off. This commitment has shown through in her representation of Scout in To Kill A Mocking Bird on Broadway, for which she received a Tony Award in 2019.

The NYCLU and the ACLU are also honoring Eva Price and the founders of Level Forward: Adrienne Becker, Abigail Disney, Rachel Gould, and Angie Wang — a female-led entertainment company, producing outstanding works on Broadway, as well as other mediums. Their commitment to projects spearheaded by female creatives and people of color challenges and inspires all of us to advance diversity, equity and inclusion. Additionally, their efforts to level the playing field through innovative revenue sharing partnerships with nonprofits has the power to transform the industry.

The event this year is executive produced by Robb Nanus and Rachel Sussman. Rona Siddiqui will serve as music director. Jereme Kyle Wilson will be the production stage manager and Jeremy Leiner serves as associate producer. Projection and video design will be by Kate Freer, lighting design by Alan C. Edwards, and scenic design by Donyale Werle. The band will include Geoff Countryman, Clinton Curtis, Justin Goldner, Janna Graham and Cynthia Meng.

Broadway Stands Up For Freedom is co-founded by Liana Stampur and Erich Bergen.

For more information or to purchase tickets, visit www.broadwaystandsup.com. Proceeds from the concert will benefit the NYCLU’s and ACLU’s missions to promote and protect the civil rights and liberties in New York and across the country. VIP tickets ($250/500/1000) and regular admission tickets can be purchased through Ticketmaster and through the Town Hall website www.thetownhall.org, or in person at the Town Hall box office. To purchase sponsorship packages, please visit www.broadwaystandsup.com.

In 2019, Level Forward’s work was nominated for a combined ten Tony Awards, including two for What The Constitution Means To Me, and two wins for Oklahoma!, one of those going in the history books for Ali Stroker. Level Forward also wrapped four films in the past year, all by first-time female, feature film directors including Topside from wife and husband team Celine Held/Logan George and The Assistant from Kitty Green, as well as seven short films from a variety of emerging female filmmakers in partnership with Refinery29. The Team is also a producer on Slave Play’s transfer to Broadway and the forthcoming musical Jagged Little Pill.

Alongside the Company’s creative properties, Level Forward also addresses systemic challenges and opportunities through its various initiatives. Among them, the Company’s commitment to cause 10% of net proceeds from each Level Forward property to go to designated non-profit organizational partners, at least one paired with everything produced. Level Forward also shares a lot of the Company’s deal language addressing equity and impact around the industry, including its Gun Neutral initiative. The apolitical collaboration among multiple entertainment companies creates an offset for any productions that includes guns, on screens and stages of all sizes. It has also invested in developing technology such as Rotten Apples which bridges storytellers with community organizers and are working to increase the visibility and access of women and people of color to the entertainment industry, on emerging community platforms and internal programs it is currently incubating.

At the heart of Level Forward is the belief that perspectives which have been kept on the margins until now can be the most innovative and valuable, and that being a good business must start by doing good. Level Forward shared the Tony stage with 25 survivors of gun violence, and it shares this ACLU honor with the community and movement at large to re-define what a high-performance enterprise looks like, and how it behaves justly, equitably and ethically for all.