Laura Benanti, Megan Hilty, Celia Keenan-Bolger and Chita Rivera Give Back at the 2019 Broadway Back to School Gala 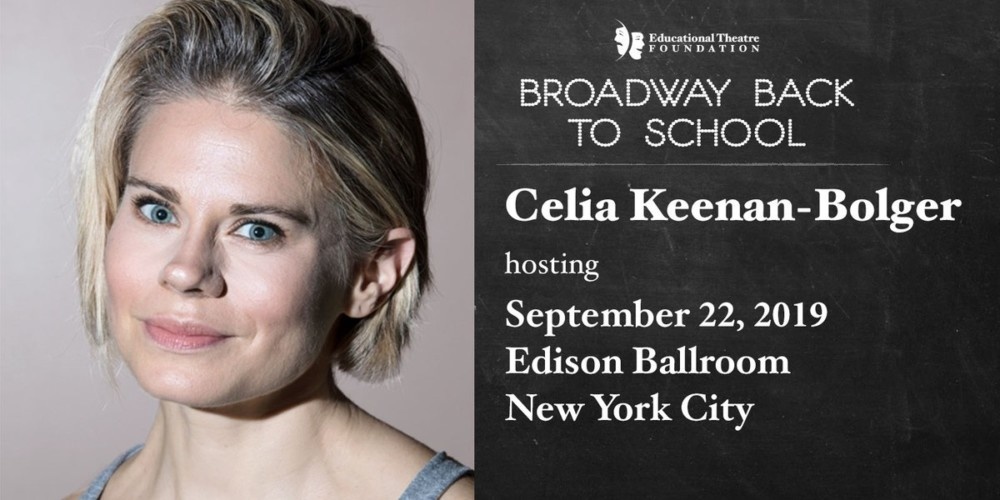 Laura Benanti, Megan Hilty, Celia Keenan-Bolger and Chita Rivera Give Back at the 2019 Broadway Back to School Gala

An all-star cast will join the previously announced Tony Award-winners Celia Keenan-Bolger and Chita Rivera to give back to school theatre by supporting the Educational Theatre Foundation(ETF), which provides financial support for school theatre education programs.

They are joined by award-winning student Thespians from across the country in this unique evening of entertainment.Broadway Back to School is the only event where professional artists share their talents alongside behind-the-scenes stories of how they got started in high school theatre, stories are as inspiring as the high school Thespians with whom they’ll perform. (Thespians are members of the International Thespian Society, the honor organization for middle and high school theatre students, with 2.4 million alums, currently celebrating its 90th anniversary.)

Tony, Drama Desk, and Outer Critics Circle Award winner Laura Benanti was most recently seen on Broadway as Eliza Doolittle in My Fair Lady and won her Tony as Louise in Gypsy, but her first award was a Paper Mill Playhouse Rising Star Award for Outstanding Actress in a high school production for the title role in Hello, Dolly!.

John Cariani, the stage and screen actor most recently seen in The Band’s Visit on Broadway, is also a playwright, best known for Almost, Maine, the most produced play in U. S. high schools for five years in a row.  It is also one of the most popular plays in the world, having been translated into over a dozen languages.

Thespian alum  Gavin Creel (Troupe 451 in Findlay, Ohio) won a Tony Award for his performance as Cornelius Hackl inHello, Dolly!, and an Olivier Award for Best Actor in a Musical as Elder Price in the West End production of The Book of Mormon.

Tony Award nominee Megan Hilty is best known for her work as Ivy Lynn on NBC’s Smash. Her Broadway credits include Doralee in 9 to 5: The Musical and her Broadway debut as Glinda in Wicked.

Cariani will introduce Derailed, a play by Thespian Jared Goudsmit, a finalist in the 2019 Thespian Musicalworksprogram and 2018 Thespian Playworks program.  To Kill a Mockingbird star Will Pullen will perform a scene from the student playwright of Troupe 748 in Kirkwood, Mo. Pullen is joined by Victor Colasurdo a Thespian alum of  Troupe 7455 Toms River, NJ and current Pace University student,  and Qawiyya Haqq, a Thespian from Troupe 7891 Burlington County Institute of Technology, Medford, NJ.

A highlight of the evening is the presentation of the Broadway Back to School Award to honorees Marc Shaiman and Scott Wittman in recognition of their leadership in building access and excellence in school theatre. They were among the first creative leaders in the theatrical industry to recognize that the involvement of young students in musical theatre was essential for their success in school and life, as well as for the progress and growth of the industry.

The Educational Theatre Foundation  was launched November 2017 as the philanthropic arm of the Educational Theatre Association, which is the home of the International Thespian Society. ETF provides essential financial support to enhance excellence in theatre education and to expand access to school theatre programs for every child, putting them on a more positive life path. ETF is focused on three areas: JumpStart Theatre – to create sustainable musical theatre programs where there previously were none; need-based grants to schools – to provide teaching and performance resources and equipment in under-resourced schools; and merit and need-based grants to individuals — to nurture the next generation of theatre teachers and artists.  In its first year, ETF has awarded more than $650,000 in grants, directly impacting high school theatre programs in 50 cities and enabling the development of musical theatre programs in underserved middle schools in six states.