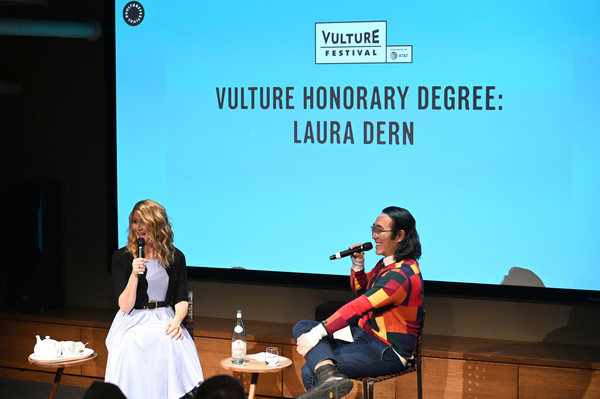 Laura Dern has won more awards than we can count. But, this weekend she got something to add to her shelf of trophies that is a bit different.

The “Big Little Lies” actress was the recipient of Vulture’s first totally official, unofficial honorary degree. At the ceremony honoring her achievement at Vulture Festival in New York, Dr. Dern explained why she never graduated from college and her deep love for the arts.

Dern, who left school to do “Blue Velvet” spoke at the panel about the experience that made her a star. Trying to convince the head of her college’s film department to give her time off to to do the role she said to the audience, “They read it and said, ‘Not only are you giving up your college career if you go make this film, but we can’t believe you would want to do this movie.”

At the Academy Awards Governors Awards in late October, Dern presented Lynch with an honorary Oscar, which gave way to a “quintessential moment” with her friend and long-time mentor.

Talking about his reaction to getting an Oscar finally she told the room, “He goes, ‘Wow, this is so pretty. And then he goes, ‘But you know, we’re just lucky … They’re not our ideas. We’re just lucky if we catch them.’ And I was just like, ‘Yeah well, that’s David Lynch.’”

Here is Laura Dern and her cool world.