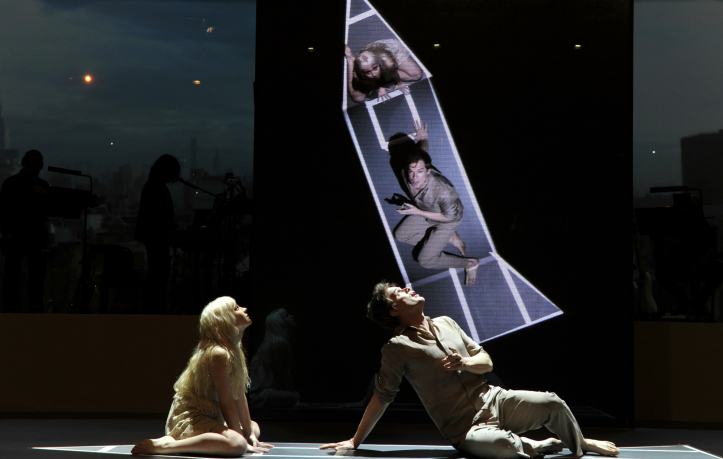 I never got to see this musical when it opened at the New York Theatre Workshop. It was sold out almost instantly and I didn’t have the Outer Critic Circle in that I have now, but with the buzz of Lazarus and David Bowie combined, the streaming of the show was just too hard to ignore or pass up. It’s definitely a twisted heady trip to outer space; part sci-fi, part Bowie rock concert, shifted and structured, if you want to call it that, by the intensely unique Enda Walsh, the writer of the phenomenally fascinating Ballyturk. I can’t say that I always intuitively know where he is purposefully taking us in his plays, but here within the sequel to “The Man Who Fell to Earth“, the journey is a visual splendor grass of fantastical sophistication, staged with innate wonderment by the always interesting Ivo van Hove (Broadway’s West Side Story, West End’s All About Eve). The 1976 film, directed by Nicolas Roeg, was described back in the day by a critic from Empire as “profound and unknowing“, and if I could steal those words, just this once, I would gleefully honor this oddly engaging production with those exact same adjectives, plus a few more that might lead us down a slightly different path.

Centered around the twisted stranded extraterrestrial, played with empathetic dementia by Michael C. Hall (Signature Theatre’s Thom Pain (based on nothing); “Dexter“), this study in alienation and trauma feeds us, most willingly, a meal of numerous flavors and installations, with songs from Bowie’s wonderful catalog, and performances that are solidly constructed and meticulously performed. This kaleidoscope of impulses follows the show’s lead character, Thomas Newton, a creature from another place that Bowie inhabited most magnetically in the film, down and through an emotional expanse worthy of the film and the singer. Thomas is now financially rich but living in alcoholic seclusion, dreaming of a lost love, Mary Lou, while being cared for by a worshipping assistant by the name of Elly. It’s clever and solid in structure, playing out the complications with authenticity and abstractionism, and then, most dynamically, Thomas starts to engage in hypnotic conversations with an ethereal character simply known as ‘Girl’. He’s trapped and drowning alongside this ‘Girl’, flinging himself majestically around the sparse but complex landscape with high voltage energy, especially when David Bowie’s beats begin to fly outward, into his and our heads.

I was so wanting to “look up here” with wonder and excitement. There was nothing left to lose in this pandemic age, but the disconnect protected on the back wall, although beautiful and edgy, gets a bit lost in the manic pixels from the past. The music is obviously dynamic, with Japanese Geishas, Yoko Ono and John Lennon projections showing up to march this energy forward with Cha Cha Changes, bringing heat, guns, and bullets to the forefront. Amy Lennox, who plays the complex and intoxicating Elly, sings the 1971 song as a logical extension of her transformational desires, breathing life into the iconic Change song while we watch some of the other classics falter. Elly’s boyfriend, Zach, played strongly by Bobby Moreno, gives the shared space tension, but he and the actor are underused. The magnificent Sophia Anne Caruso (Broadway’s Beetlejuice) as the strange hypnotic ‘Girl’ delivers strength and power to her “Life on Mars?” backed strongly by an electric onstage band behind a clear acrylic screen. Her transcendent voice floats dynamically out, captivating our hearts and minds deeply and thoroughly, but does it really take us deeper into her character or situation? It’s hard to know, as the abstractions linger and weave themselves in and around our head in ways that don’t give us much understanding or clarity.

The layers are purposeful, with a clear concept, but where does it lead us to in the end. Designed by the evocative Jan Versweyveld (Park Avenue Armory’s The Damned) alongside video designer Tal Yarden (National/Broadway’s Network), the logical narrative disintegrates into the ultra-chic and depressive void of the space alien. Thomas guzzles down alcohol in the minimalist studio like he’s drinking water, while violence and foreboding tension ricochets across the large monitor and paints the back clear wall with pain and anger. A man named Valentine, played demonically by the mesmerizing Michael Esper, looks with a hunger to be surrounded by love, while psychotically wanting to destroy it with a psychotic passion. The ‘Girl’ seems to be somehow connected to this murderous ploy, but the lines that are taped to the ground never take off into a universe of comprehension. Do we need to fully understand the motivation of Elly’s transformational desire or the murdered Girl’s haunting? Well, probably not entirely. The dreamy fearful tale slips beyond our grasp, but is still quite beautiful to behold, especially when Hall gives us a heartbroken “Hereos” to admire and breath in. Even the most casual of admirers of Bowie will be blown away into a fan-based orbit, embracing the poetry and the ingenuity of this iconic, but confounding genius, especially when enveloped by the vocals of Hall.

For all of the show’s cryptic melancholy, the vibe is as freakishly engaging as each of Bowie’s eclectic songs. The fragmented scenes try to evoke emotional loneliness and loss inside a mental crisis storm layered with obsessive references. Walsh’s script is as scattered and confusing as Newton is walking around looking for his twinkies and a purpose. “You were sent here, and can’t get back home“, he realizes, stuck here and forever heartbroken. Yet, for all the show’s skill in projecting emotionality, I found myself more impressed by the visual sophistication than its attempt to present an engaging story. Many of the critics in New York and London stated that they found themselves lost in space, emotionally and intellectually confused by the plot, and I can’t say that I blame them. The abstract ideas and shrewd visuals layer up one on top of another without pause, giving existential anger and frustration a free rein to run wild. Never finding comfort in his surroundings, the lead and the audience engage in a complicated trek to understand how and where the story and Bowie’s electric music are taking us. And can we believe in this journey?

Thomas and the ‘Girl’ play inside the boundaries of a fantastically achieved attachment filled to the brim with hypnotic allusions and illusions, steeped in literary footnotes connected to Shakespeare’s Hamlet and beyond. The worlds are aligned, suggesting conflictual parallels with the Danish prince, that live and breath within. But if you truly desire to be pulled along by a driving narrative or sensical plot, you might want to stream elsewhere, as the abstractionisms are given the center stage and the spotlight completely. Only when Lennox sings heroically of her divided self or when Hall shines his vocal light into his character’s tortured soul do we find forgiveness and connection. Bowie’s songs and his untimely death add weight and wisdom to this study of pain and alienation, but can’t ultimately save itself or bring itself back to centeredness. We join solidly with the feeling, mainly because of Walsh’s wild ride through that dreamscape. But in reality, it is thanks to van Hove’s tense overwhelming staging, Yarden’s hypnotic imagery, and Brian Ronan’s dynamic sound, that we can fully embrace this original and trippy journey, propelling ourselves into the starry space of authenticity and abstractionism where we can float in its aura. It’s worth the ride, even when you don’t know where you are going.